Study Reveals Where the World’s Vintage Hotspots are Located 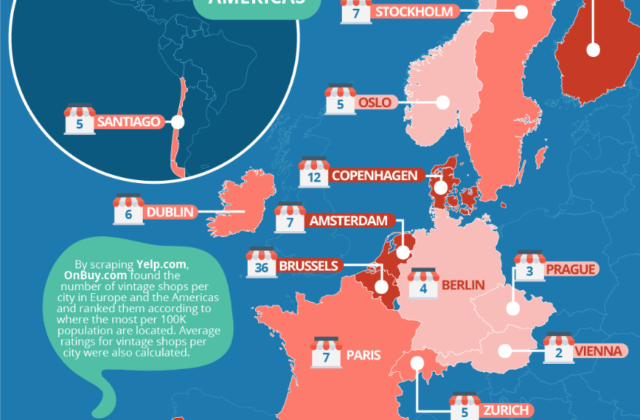 Debate remains on the best vintage brands to buy, but where is the best city to buy them in? OnBuy.com scraped Yelp.com for the number of vintage shop listings in cities across Europe and the Americas, to reveal the world’s vintage hotspots!. 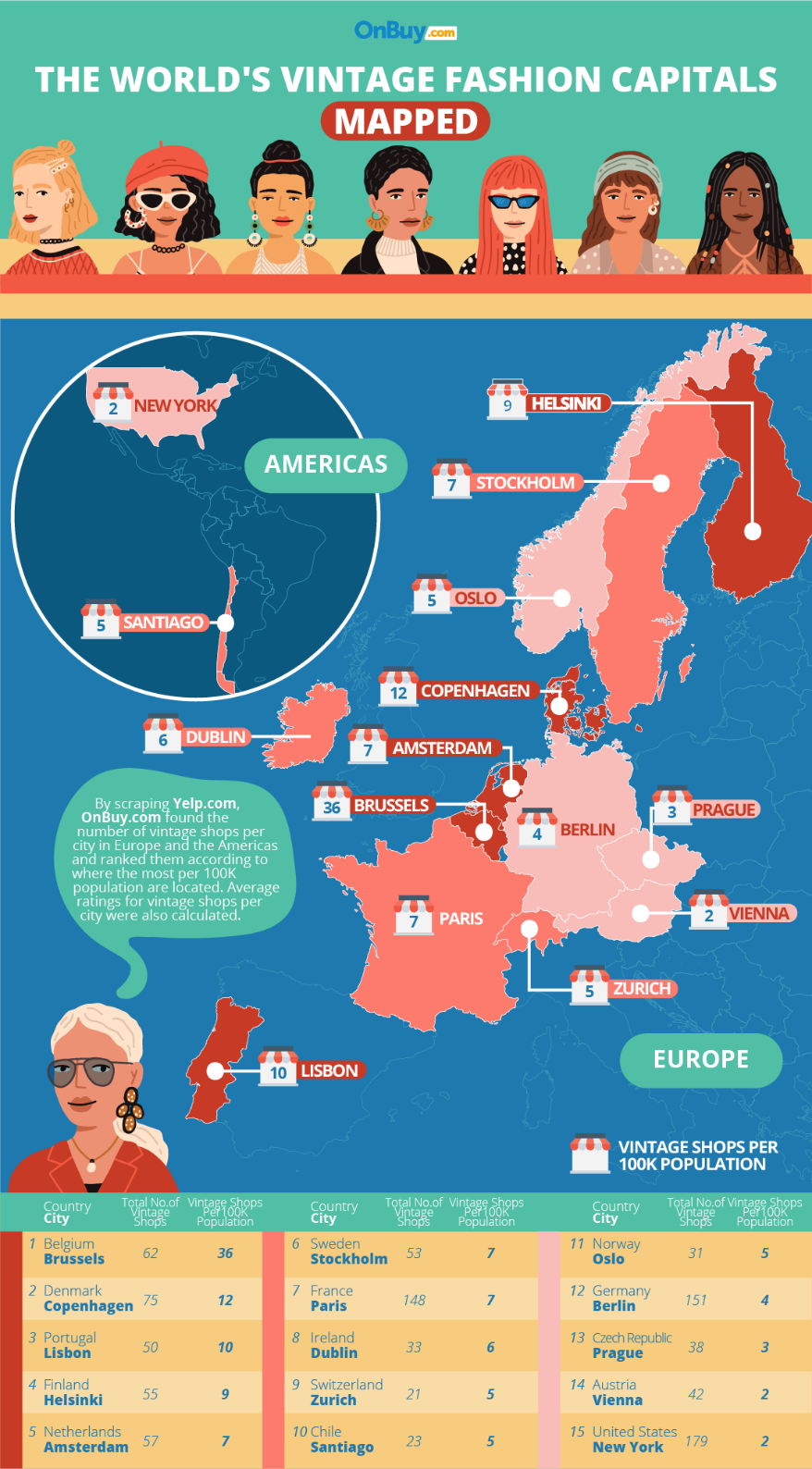 In first place is Brussels with 36 vintage shops per 100,000 people. Belgium’s capital is bustling with country-wide favourites like Think Twice, the leading brand which is definitely worthy of a visit.

Copenhagen has the second highest number of vintage shops, boasting 12 per 100,000. In total, the city houses 75 stores but due to its larger population, it just misses out as the world’s vintage hotspot. Head to the likes of København K, Dansk Røde Kors or PRAG to rep the retro look.

Lisbon and Helsinki follow in third and fourth place with 10 and 9 shops per 100,000, respectively. A vintage store of note in Finland’s capital is UFF, which claims to “support sustainable development, employment in Finland and development cooperation in Africa and Asia.”

Rounding off the top five vintage hotspots are Amsterdam, Stockholm, and Paris. Whilst Dutch are known as eclectic, Swedish for their eco-friendly choices, and Parisians for their unmistakable fashion sense, each capital boasts 7 shops per 100,000 people.

Flipping the results, in 15th place is New York. The availability of shops may be surprising in the big apple, however those on offer are the third highest rated in all cities analysed – vintage stores average 4.16 out of 5.

Which city has the highest rated vintage shops? 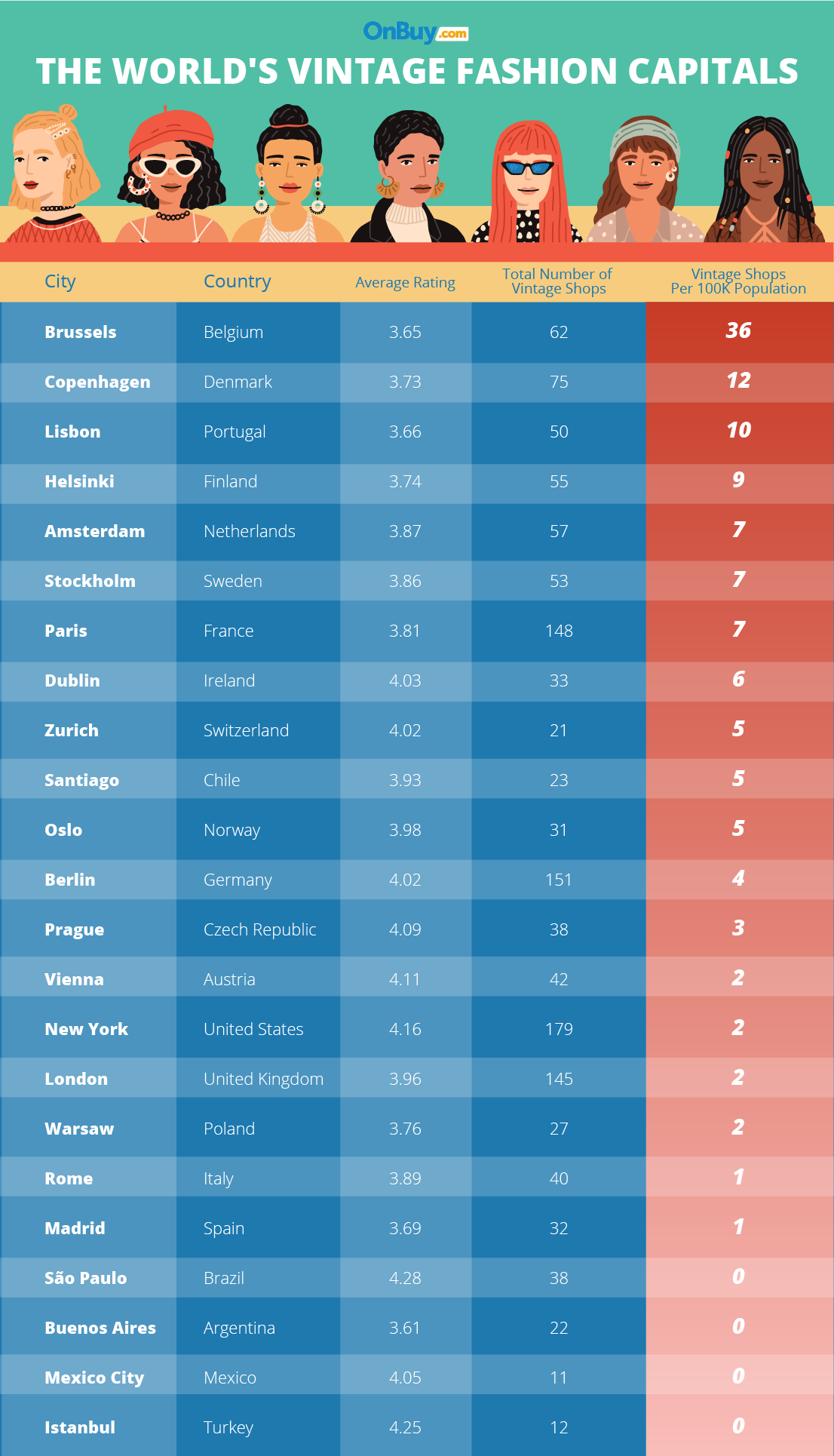 As well as the number of shops available, OnBuy.com also scraped the average ratings of second hand shops in each city. With a quality rating average of 4.28 out of 5, vintage shops in São Paulo, Brazil are the best. Alternatively, Buenos Aires is revealed to have the lowest rated shops at just 3.61 out of 5.
Ratings for all cities analysed can be found opposite:

The full data breakdown of all cities analysed can be found HERE.
Please also find images for editorial use in this Dropbox link.

Methodology:
1. OnBuy.com collected business information from Yelp.com including name, address and ratings for vintage/second hand shops in 23 of the most populous city in countries around Europe and the Americas. Shops with no reviews were omitted from the results.
2. The results were then aggregated by city with the following metrics being calculated: Total number of shops, most popular shops and average ratings.
3. Using population estimates collected from Data.un.org, we calculated the total shops per 100,000 people for each city.
4. The final results were ranked by shops per 100,000 people to reveal the world’s vintage hotspots!
5. Data was collected on 20/05/21 and so is accurate as of then.
We really hope you find this release useful. If you do end up using it, we would appreciate a link to https://www.onbuy.com/gb/. A linked credit allows us to keep supplying you with future content that you may find useful.