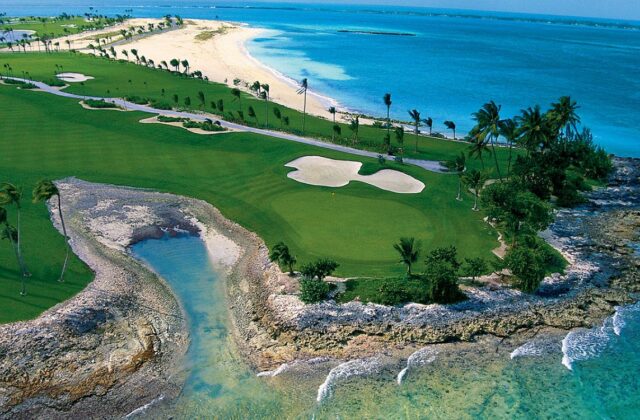 Gumbo Limbo, reef sharks, and Justin Rose are all woven into the fabric of an 18-hole round at the beautiful Ocean Club Golf Course on Paradise Island in the Bahamas. Ocean Club delivers non-stop landscape visuals, only in the Caribbean back stories, and an upscale island vibe that is pure Bahamian.

Prepare to witness the Caribbean Sea on each of Ocean Club’s sun-splashed 18 holes. Your golf adventure becomes especially interesting on the seven holes that touch this photo worthy turquoise sea. These are the same multi-layered shades of blue that draw seven million tourists to the island each year, only this time in a golf environment.

Ocean Club welcomes golfers at the pro shop and restaurant deck with a sweeping left to right view of the 18th green, ninth green, 11th green and 10th tee box. General Manager Robbie Leming elbowed a first time Ocean Club golfer staring wide-eyed at this scene and said, “How can you not love this?” 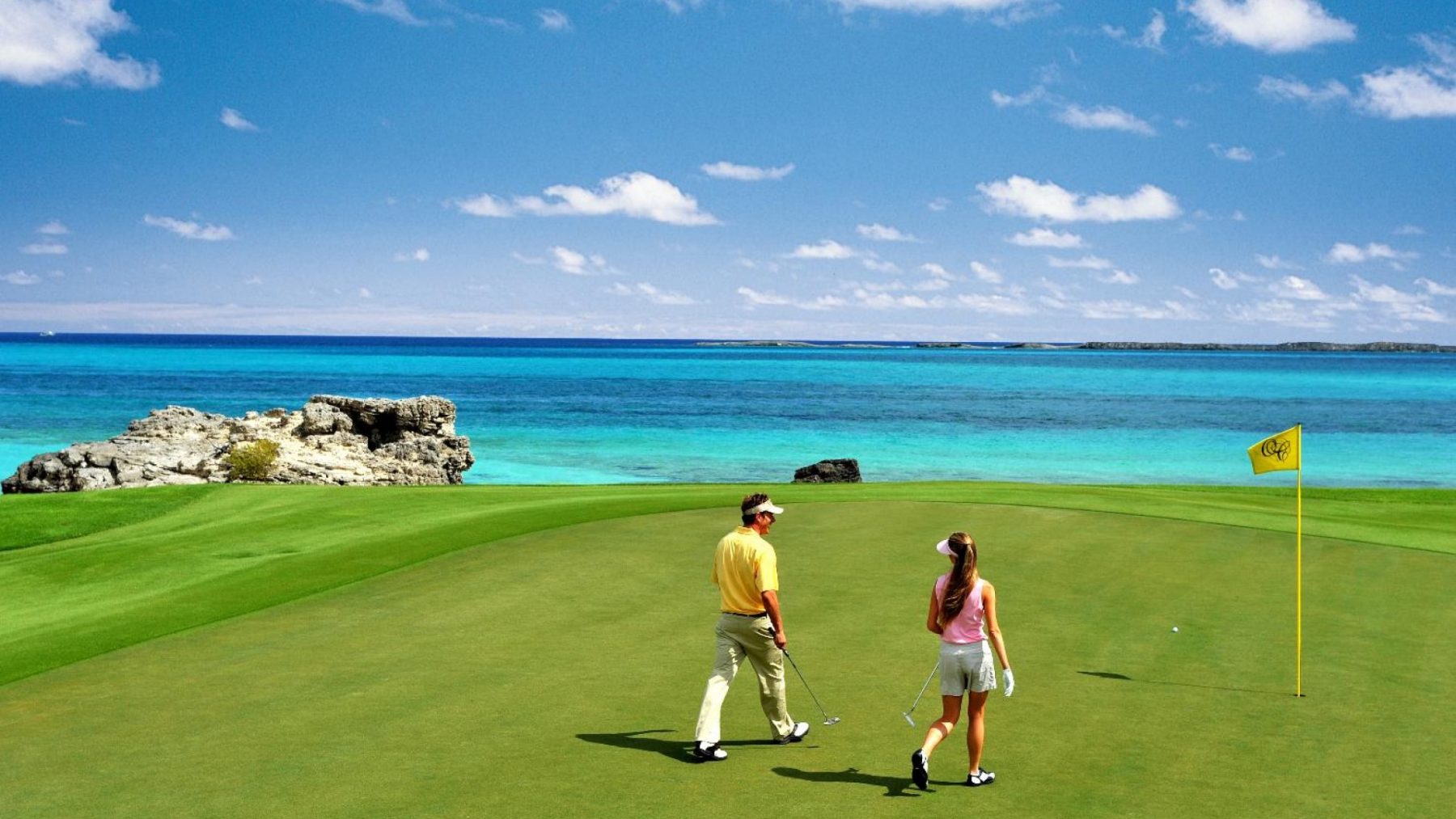 Part of Ocean Club’s mystique occurs because of the Bahamian flavor that is sprinkled throughout this Tom Weiskopf design. Golfers can’t help but ponder the names posted on signs next to each Ocean Club tee box. The first hole is christened with the delicious tag of Gumbo Limbo. Before you think this is a favorite Bahamian soup, realize this label honors the species of hardwood trees that are prevalent on this 403-yard Par 4.

The 411-yard, Par 4, 7th hole is called the Peninsula. This scene stealer features a zigzag tee-to-green journey that culminates in a putting green embraced by water on three sides. The hole is so photogenic that you can purchase a postcard reminder at the pro shop. 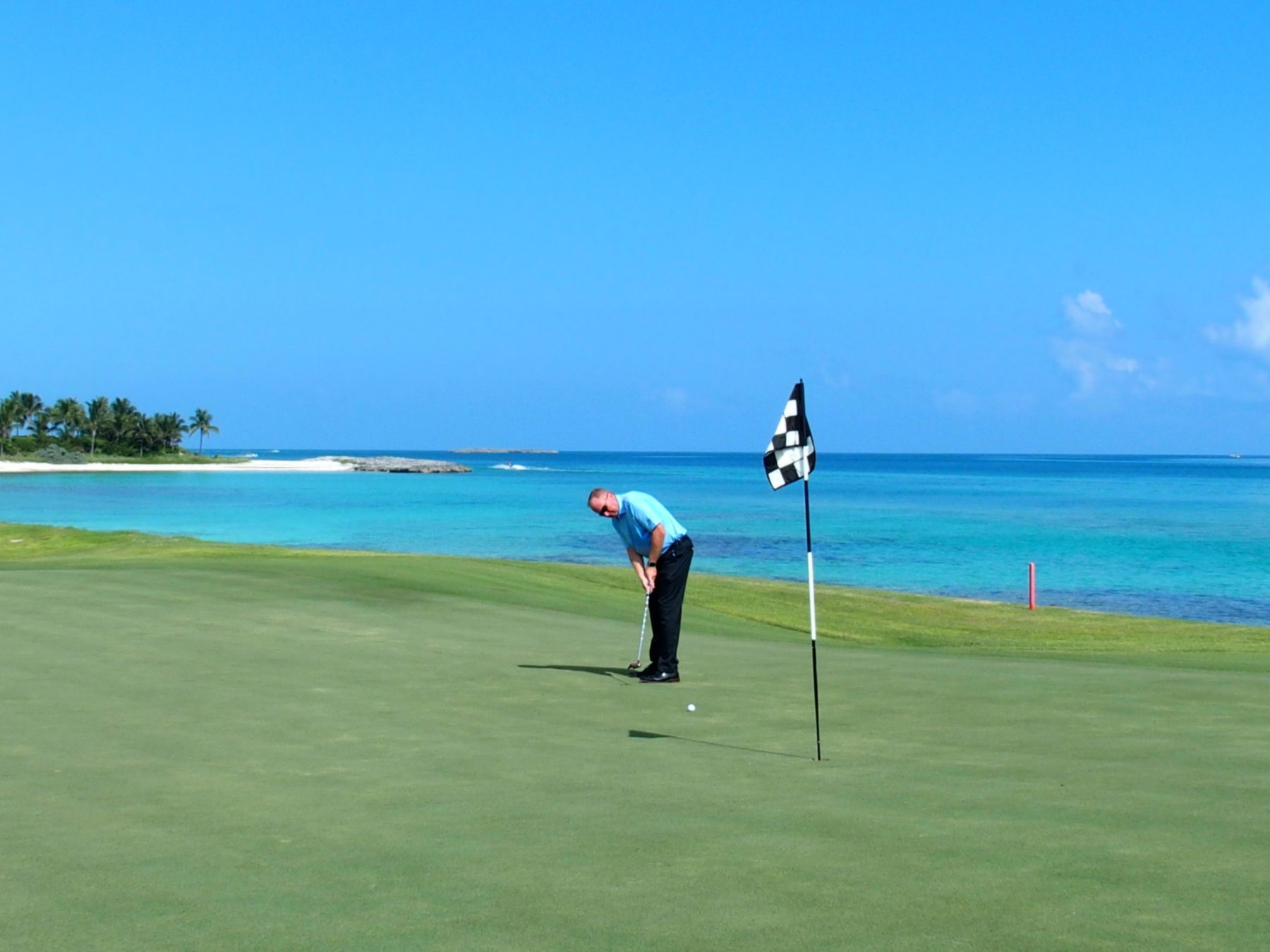 Paradise Found is the name of the picturesque 433-yard, 9th hole. This title tugs at the heart of a Bahamian who frequents Ocean Club on an almost daily basis. Herbert, a limo driver for the Four Seasons Resort, remarked that he’s fallen in love with his treks to and from the Ocean Club. “Entering this golf course is the favorite part of my job. I dream that someday I’ll live here. It’s okay to dream big, right?”

The image of Ocean Club has found its way into the living rooms of television viewers on multiple occasions. In addition to being the locale for the Big Break golf reality show in 2012, this 7,100-yard track has also been home to several LPGA events including the Pure Silk Classic from 2013 to 2018.

Members of the PGA Tour have found Ocean Club to be a great escape. Ernie Els held the course record until Justin Rose broke his mark with a 63 in 2016. Future PGA stars will test Ocean Club in November during a Mens and Womens NCAA event. 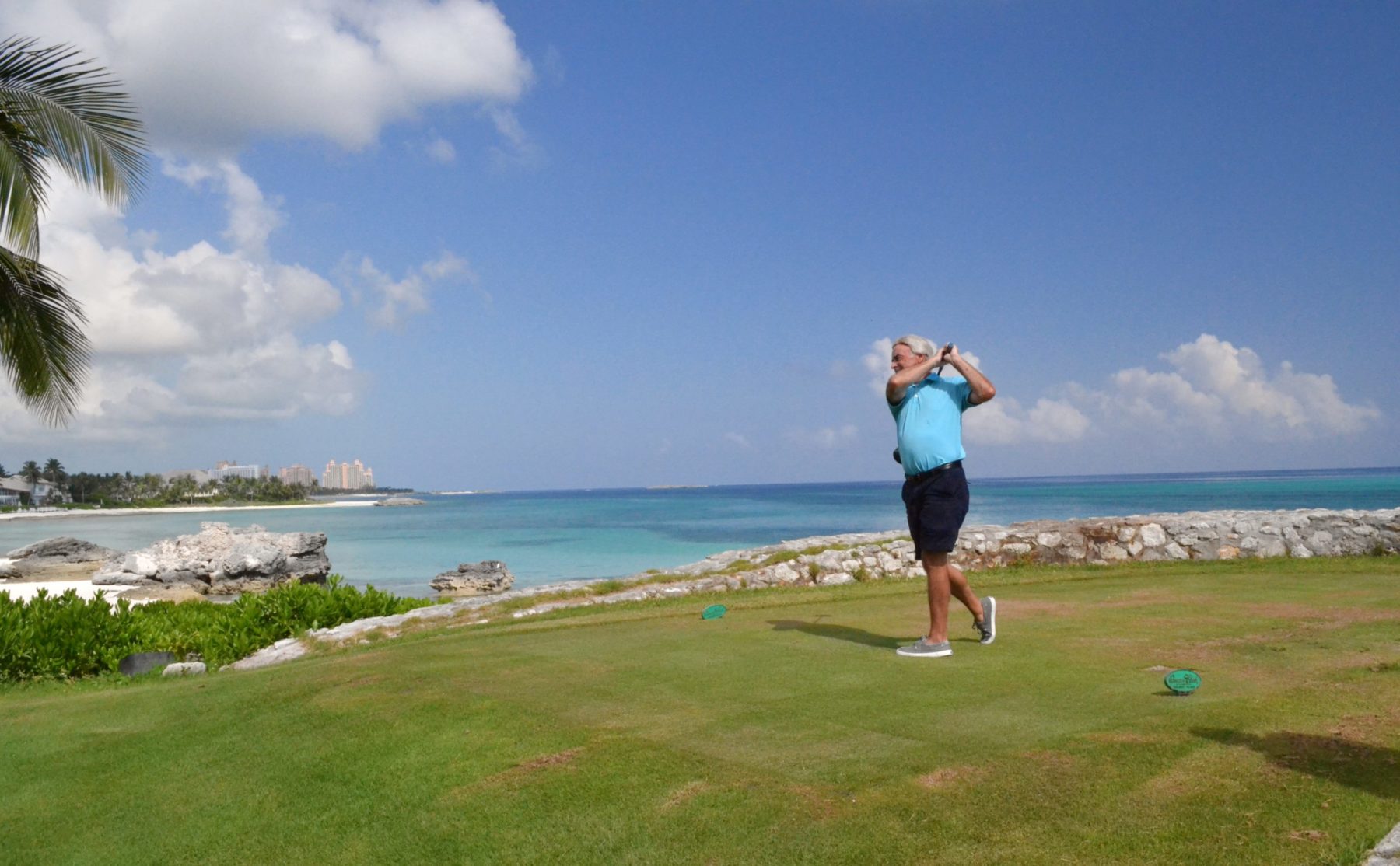 With the course’s international exposure and a growing reputation for combining challenge with beauty, Ocean Club has become a favorite for travelers looking to add ocean golf to their vacation itinerary. Leming attributes his course’s popularity to its wide fairways, sterling conditions provided by long-time Director of Agronomy Jeff Hood, and the dramatic blue stuff crashing along the course’s shoreline.

Before or after your round, you’ll note four Tabby cats that call Ocean Club home. The cats have taken up residence long enough that they answer to the names Monkey, Bubba, Goldie, and Princess.

Birdwatchers enjoy the 40 different species of bird life found at Ocean Club. There is a whole congregation that operate on legs that appear longer than most NBA centers. Osprey, Ibis, and a local family known as Stilts would all order their pants in the Big and Tall bird shop. If you tend to slice, please don’t be offended by the guffaws coming from a species dubbed Laughing Gulls.

There is another Ocean Club neighbor you may spy swimming by the 4th green and near the private beach located to the right of the 5th hole. Leming’s entry into scuba diving was tempered after watching an episode of Shark Week and discovering that the Reef Sharks featured in an episode happened to reside along this Par 4, 429-yard hole.

Going Well in the Bahamas 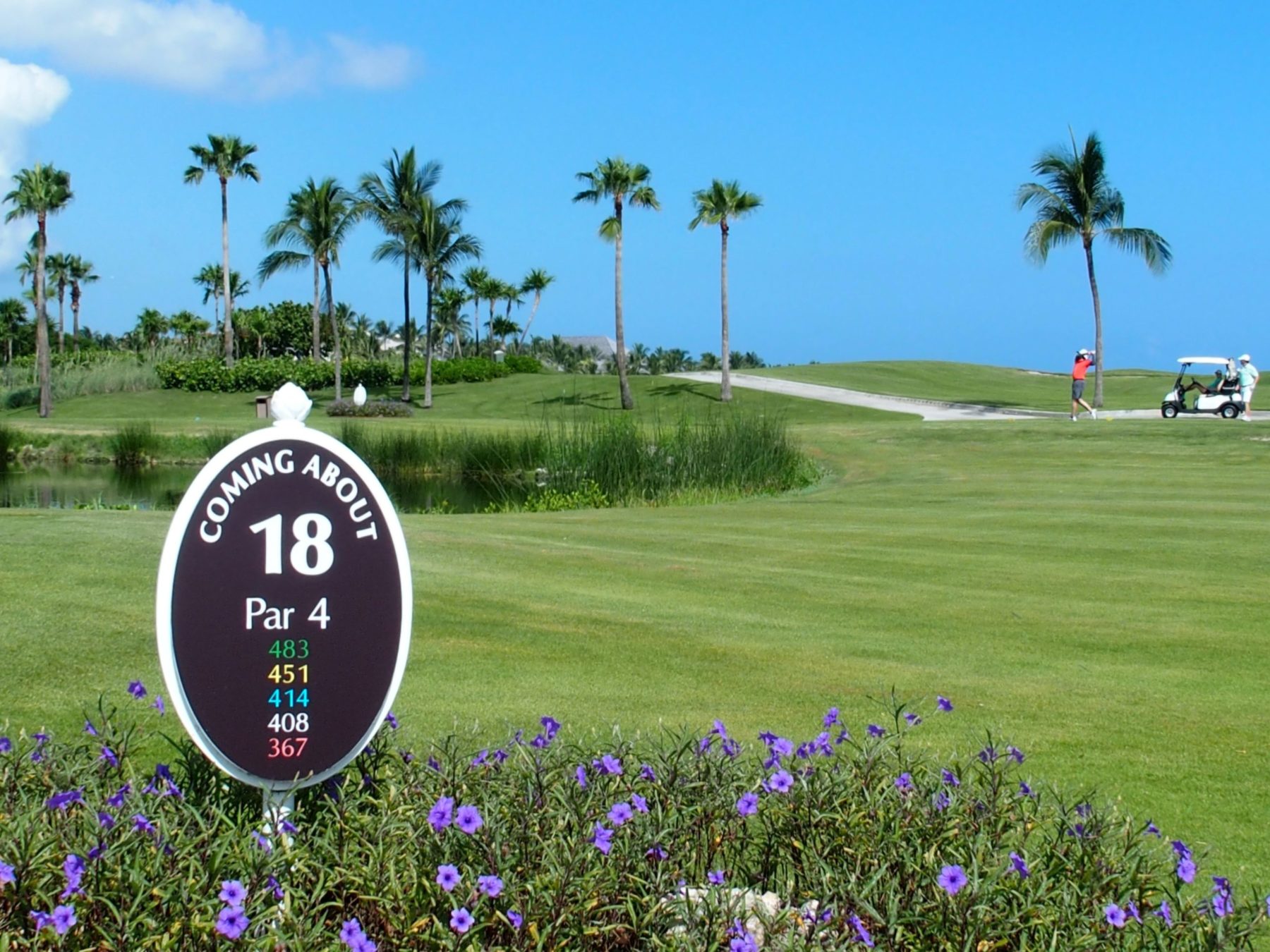 The 17th hole is a classic, especially if you’re playing from the tips. For those driving from the green tee box, a palm tree leans so far into the fairway it looks like it’s doing the limbo. Weiskopf so loved this tree, that when it was uprooted after a hurricane, he ordered it replaced.

The 17th’s left side is nothing but Caribbean Sea, and a beach considered the most beautiful on the entire island. The putting green is guarded by bunkers and rolling contours. Number 17 serves is a “top this” transition into Ocean Club’s final entrée.

The Par 4, 418-yard 18th hole is named Coming About. The Bahamian saying for “it’s going well” is a fitting description for your Ocean Club golf experience. After a day of extreme Caribbean visuals, bird encounters, and wave after wave of ocean holes, “it’s going well,” seems an understated reply. Returning to the elegant clubhouse, you take one last long stare at Ocean Club. That’s when you agree that this is a golf course in which it’s more than okay to dream big. 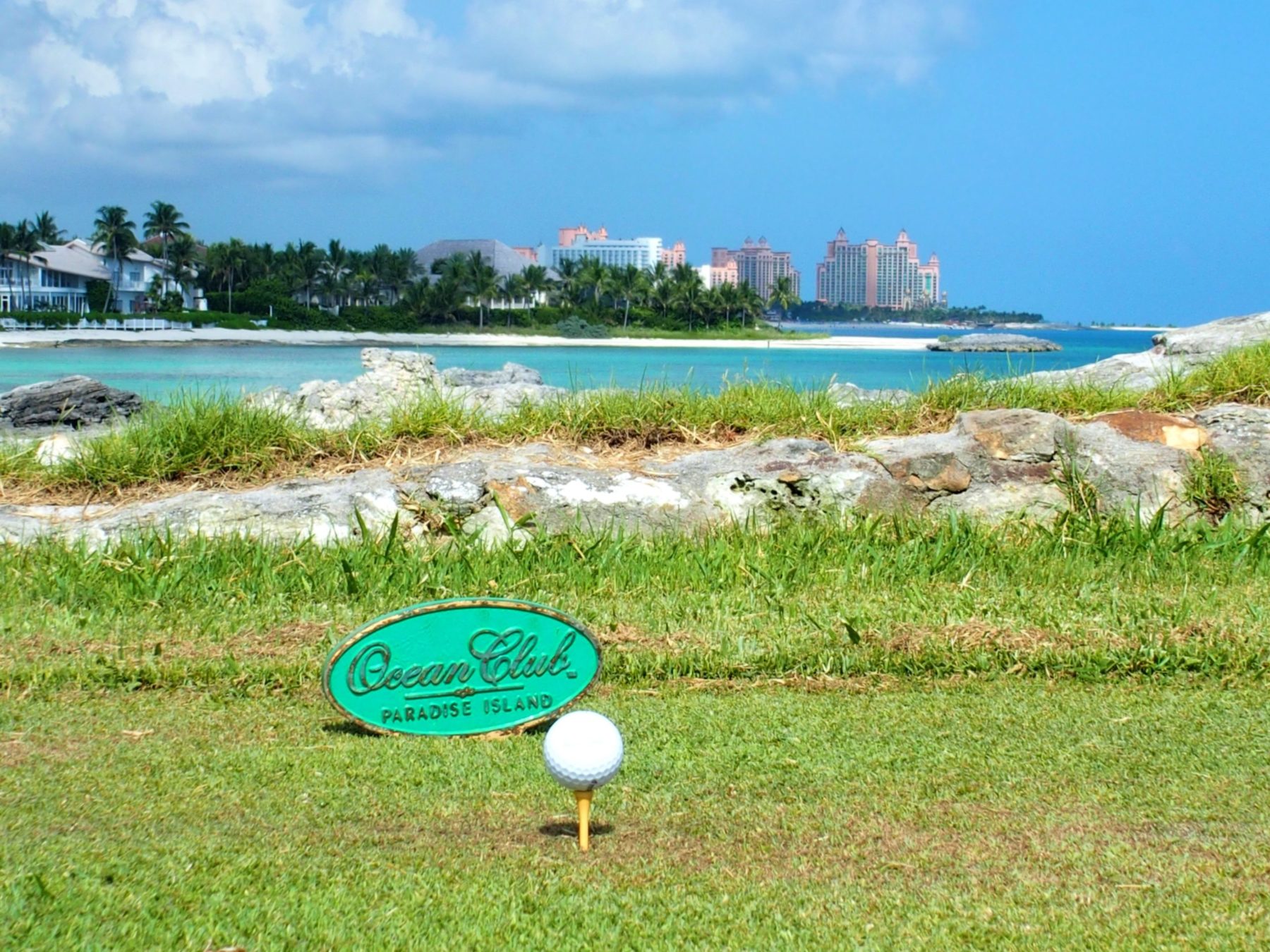