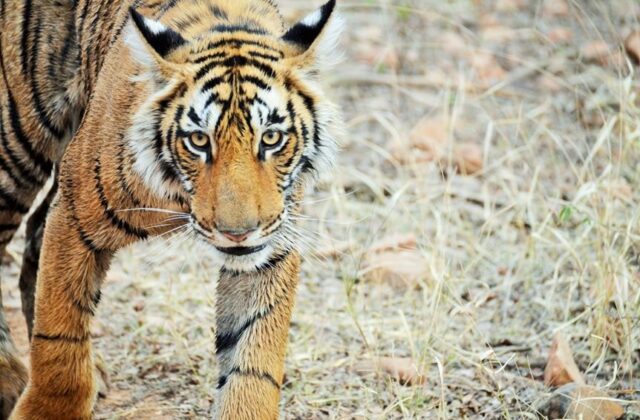 Boulder, CO — July 26, 2022 — Natural Habitat Adventures, a leader in sustainable ecotourism, is shining the spotlight on tiger conservation, with 2022 being the Year of the Tiger and July 29 marking the 12th annual Global Tiger Day.

Designed to draw attention to the plight of these highly endangered and iconic big cats and enhance support for their conservation, Global Tiger Day was established in 2010, the previous Year of the Tiger. That same year, the Global Tiger Initiative was formed, and the first-ever international meeting for tiger conservation – the St. Petersburg Tiger Summit – was convened. Known as TX2, the event and initiative saw collaboration across the 13 tiger range countries and the global conservation community towards a common goal for tiger recovery: doubling the number of tigers in the wild by 2022.

This effort has been paying off with major strides in tiger recovery: in 2010, there were just 3,200 wild tigers left in the world. That number has grown, with new figures now revealing that there are currently between 3,726 to 5,578 tigers in the wild worldwide, according to a new tiger assessment from the International Union for Conservation of Nature (IUCN). This represents a 40 percent increase since the IUCN’s last tiger assessment in 2015 and is the result of “improvements in monitoring, showing that there are more tigers than previously thought, and the number of tigers globally appears to be stable or increasing,” according to the report.

Through this strategic, long-term approach, where countries have been able to increase protections where tigers are currently, engage local communities as leaders and partners in conservation, maintain or restore wildlife corridors between areas, and boost resources to secure a future where tigers and people can co-exist, tiger numbers are rising.

Nat Hab has provided more than $4.5 million in support to global conservation efforts and gives 1% of all gross sales plus $150,000 annually to help conserve nature and reduce the most pressing threats to the diversity of life on Earth. With its mission of “conservation through exploration,” Nat Hab strives to protect the planet by inspiring travelers and supporting local communities, including in India where it operates tiger-focused journeys.

“Sustainable, sensitive ecotourism has also played an integral role in helping to bolster wild tiger numbers, with the economic impact of visitors to India’s tiger reserves benefitting the communities nearby – providing jobs and offering local people an incentive to protect the wildlife with which they share the land,” says Court Whelan, Chief Sustainability Officer at Natural Habitat Adventures. “Given that India is home to 70 percent of the world’s wild tigers, the presence of wildlife tourism here is integral to that continued conservation success.”

Nat Hab operates three tiger-focused trips in India, where tiger sightings continue to be on the upswing. The company credits the concerted effort between the government, NGOs, and many individuals, notably the tireless and thankless efforts of those on the ground like the forest guards and field scientists, for bringing the wild tiger population from dismal levels in the mid-2000s to a healthier one that is more than double that number today. However, the company cautions that now is not a time for complacency as there is still a long way to go in ensuring the habitat of these flagship animals is not further lost, which is a challenge in a country with a growing human population and substantial economic needs.

But the gains made in the wild tiger numbers are translating directly into what Nat Hab’s team in India is seeing on the ground, and, in turn, what the company’s guests now have a very good chance of experiencing for themselves on one of the trips – namely, more tigers. “It is not uncommon now to see entire litters of cubs, four or five of them surviving to adulthood,” says Conan Mark Dumenil, one of Nat Hab’s lead India Expedition Leaders. “This is unprecedented and unheard of, because until recently the survival rate of tiger cubs was about 50 percent.”

Though Dumenil adds “As trip leaders, we have a very important responsibility to set the right context for our guests. While we may see several tigers on a trip, it’s important to not take for granted and to never forget that their existence is still under threat because of human actions, while human actions can also help ensure their survival. Seeing a tiger in the wild for the first time leaves an indelible mark on your soul. You’ll never forget it. Travelers need to visit, see, and learn about wildlife if they are going to relate to it and perhaps go back and advocate for its survival.” 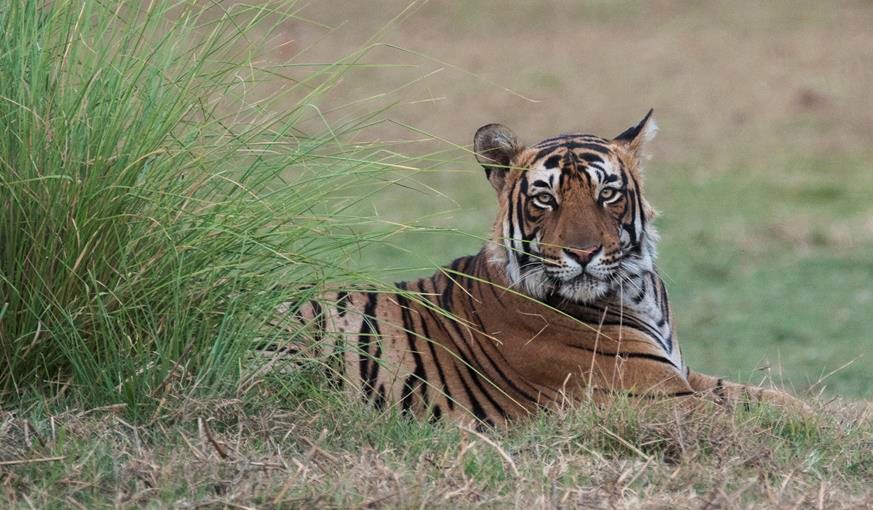 The Grand India Wildlife Adventure is a comprehensive itinerary that offers excellent opportunities to spot Bengal tigers, plus a host of other wildlife, on visits to three different national parks. Two of the parks – Bandhavgarh National Park and Kanha National Park – are home to some of India’s most concentrated tiger populations and are more remote with fewer tourists than some of the country’s other tiger destinations. Both are acclaimed for providing expansive tiger habitat and frequent sightings. The wide-ranging itinerary also includes a visit to Kaziranga National Park for rhinoceros viewing, as part of a broad survey of varied habitats that includes a plethora of other exciting Indian wildlife. 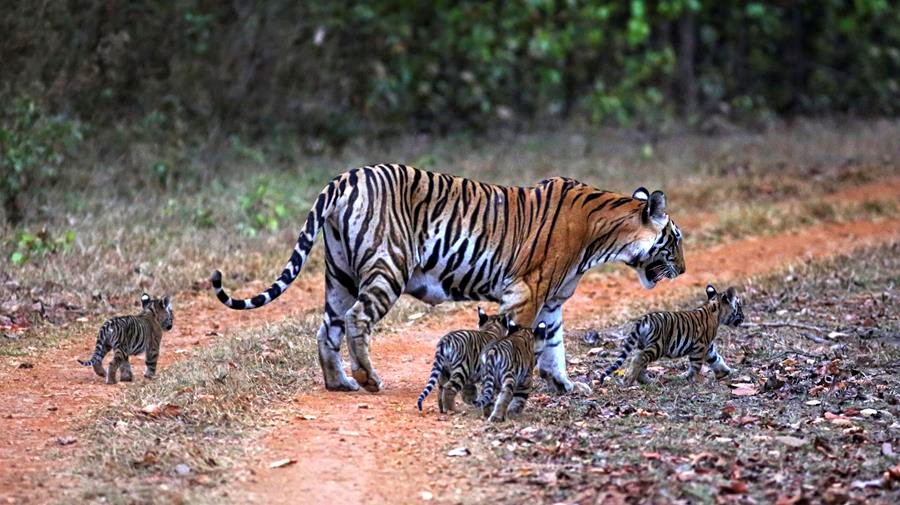 India Tiger Quest is a more singular, tiger-intensive focus in one location – Ranthambore National Park in southeast Rajasthan, which is renowned for its tiger sightings. This is a popular stop for tiger viewing during the peak winter months, yet to escape the crowds and enhance sighting prospects even further, Nat Hab strategically times this trip in late spring and early summer (mid-April to early June) when visitors are fewer and tigers less elusive. Due to the elevated temperatures, tigers must head out of the dry underbrush to quench their thirst at least twice a day – and this is when Nat Hab guests venture out, with just two travelers per open safari vehicle. The park is home to many other creatures as well, offering a chance to see sloth bears, caracals, jackals, striped hyenas, desert foxes, mongoose, and more. 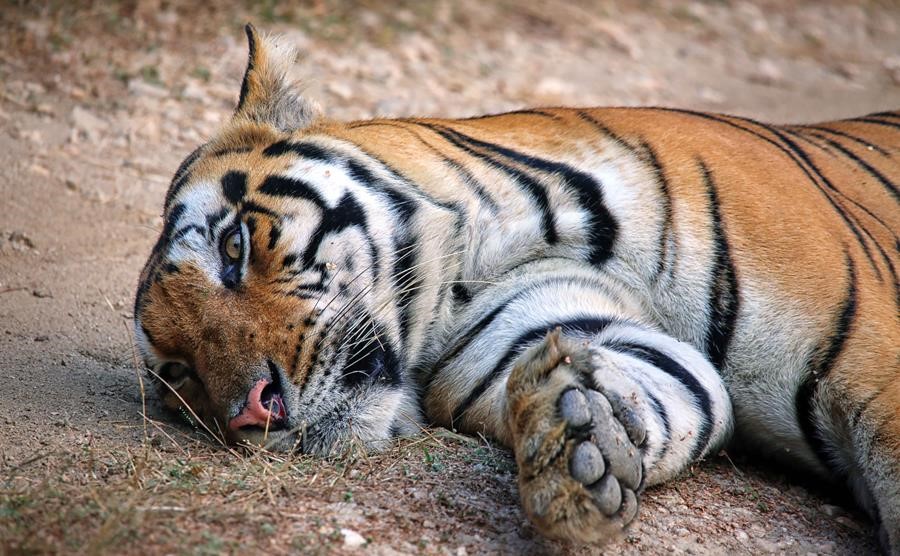 India Tiger Safari: A Photo Pro Expedition is a brand-new trip, set to debut in 2023. Designed for accomplished photographers who want to come home with coveted tiger shots and plenty more, it travels to Ranthambore National Park as temperatures start to soar, but the monsoon season is still weeks away. With fewer visitors at this time of year, it is typically the best time to see and photograph tigers. This trip also features cultural highlights, including Jaipur and the Taj Mahal (which is an optional extension on the other two itineraries). This trip is designed to facilitate the best, most in-depth opportunities to photograph tigers at an excellent time of year for sightings, along with other wildlife.

For more information on all these adventures and more, visit www.nathab.com.