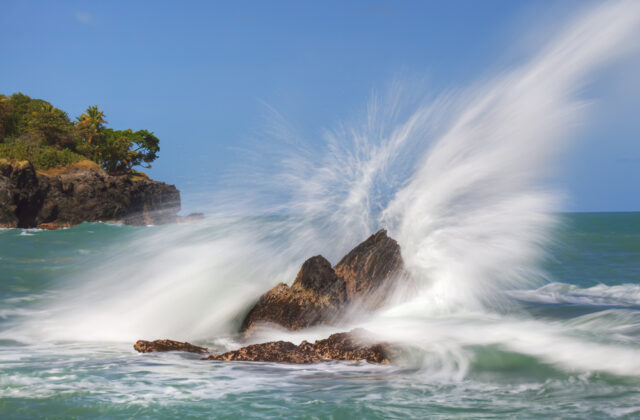 Trinidad is the most far reaching of the Caribbean islands. Almost touching the northwestern tip of Venezuela, Trinidad’s thriving commerce, industry, and ample population, fly in the face of an outsider’s preconceived view of a sleepy tropical isle.

Anderson’s “Big Splash” (shown above) was shot on Trinidad’s northeastern coast in the small village of Toco. This area was once a haven for cultivating  cocoa and coffee. Today the remote Toco is known for two quaint inns and is a favorite dive spot for vacationers. 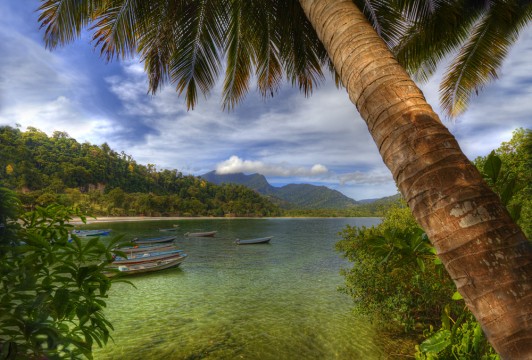 Anderson’s camera couldn’t resist this awesome marriage of blue and green hues resonating from the fishing village of Las Cuevas. The words “las cuevas” is the Spanish term for “caves.” The waters of Las Cuevas are flanked by caves on either side. Notice how Anderson’s Las Cuevas moment also managed to frame the hill country on the northern horizon. 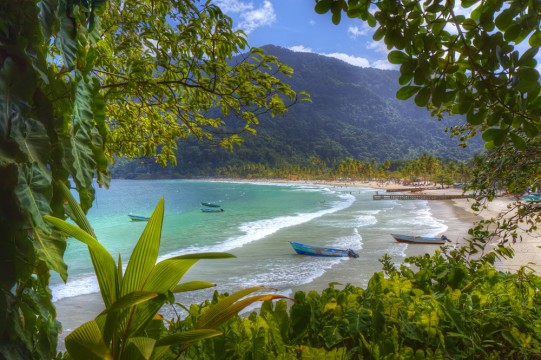 Maracas Beach is one of Trinidad’s most scenic and popular destinations. Maracas is located in Trinidad’s northern region and the mountainous drive leading up to this vantage point is a visual journey for the ages. 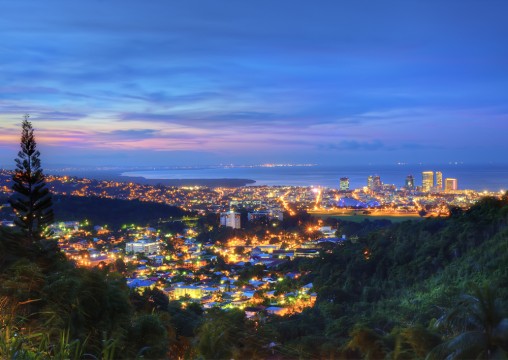 Trinidad’s capital city of Port of Spain reminds visitors that even the laid back Caribbean can explode with growth. Port of Spain is home to almost a half million people and the city comes alive with lights at night. Anderson trekked up a hillside by motor bike to catch this photographic viewpoint. Anderson clicked his Canon DSLR camera in the early evening hours to snare the optimum light warming the downtown and harbor. 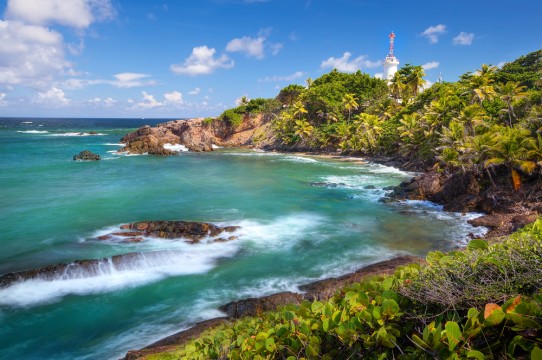 The Toco light house is a Trinidad landmark located in a northeastern region known for fishing, surfing, and  coconut estates. The light house first glowed to seafarers in 1897.

Legend has it that the name “Trinidad” has roots tracing back to the island’s thriving species of hummingbirds. As a photographer, Chris Anderson mirrors the patience of the hummingbird, hovering until the right moment to realize his honey sweet images. If you’d like to learn more about Anderson and Trinidad, visit http://www.caribbeanphotoart.com/