The Silky Sands of Sotavento 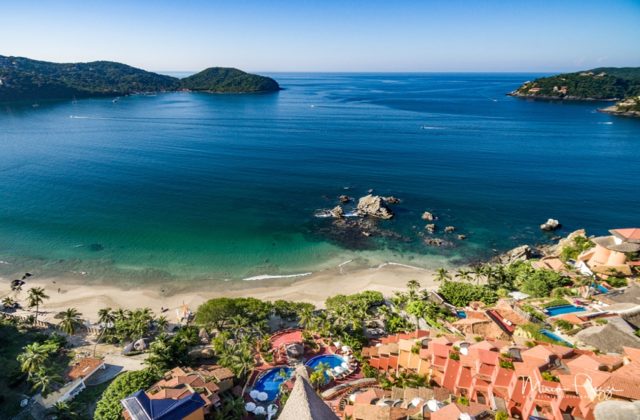 The silky sands and the clear warm waters of Zihuatanejo bay stretch out before me. To my right, a large outcropping of volcanic rock with a Mexican flag flying from the highest point, defines one boundary of the nearly 2km. beach of La Ropa, arguably one of Mexico’s premier beaches. Paddle boarders cross the calm water in front of me. A group of snorkelers swim near the rocks looking for the sea turtle that hangs out with the colorful parrot fish and schools of striped sergeant major fish. The entire bay is ringed by the dense tropical vegetation that covers the hills nestling the small fishing village of Zihuatanejo on Mexico’s Pacific coast.

Behind me is construction that was once thought to be something of an albatross. That was until a Canadian investor and visionary, Michael Drever, purchased the property and began resurrecting SOTAVENTO. Originally built in the early 50’s, Sotavento became THE hotel in Zihuatanejo with celebrity guests like Elizabeth Taylor and Richard Burton, Mick Jagger, Timothy Leary, and others. After the original owner died the hotel changed hands and in recent years, during a total remodeling, fell into financial problems and stood unused until Michael purchased Sotavento. Michael turned the property into the most luxurious ocean resort and villas in Zihuatanejo. These full ownership condos come with a special twist that allows owners to travel anywhere in the world with discounts of 30% or 60%.

Michael has been involved in the travel industry since he was a teenager. He founded Cruise Ship Carriers, a company he later sold to Expedia. He has constructed a network of travel agents throughout North America and the Caribbean with 160 offices and over 4500 agents. These OTA’s, or on line travel agencies can offer prices substantially below the published public prices on lodging, car rental, cruises, and in many cases airfares only to members of travel clubs. Condominium owners at Sotavento are automatically members of the Sotavento Travel Club and as such are entitled to 60% discounts when booking their travel arrangements themselves or a 30% discount when booked through a participating travel agent.

In addition, the resort and villas at Sotavento incorporate a focus on health and well-being with vegan and vegetarian options on the menu as well as an emphasis on locally grown fresh produce and, of course, the fresh fish and seafood that the fishing village of Zihuatanejo is known for. Daily yoga classes, spa treatments and massages round out the health minded amenities. Michael says, “I love this place and I want to make it a wellness resort.”

Positioned on the side the hill, the Villas overlook the beach and all of Zihuatanejo bay. I’m sitting in the master bedroom of a villa looking through the greenery that frames one side of a view of the bay. A paddle boarder moves slowly through the scene. A water taxi crosses the bay in the distance. The deep blue waters are calm, with just a whisper as they fall gently on the sand below. This is the sound that will lull you to sleep at night. This room like all the others faces west, so the sunsets that paint the sky with all the colors of the rainbow are spectacular!

A hammock waits on the porch for an afternoon siesta. The interior of the villa is mostly white with touches of beige, grey and aqua. Up a short flight of stairs are the living room, dinning room, and a full kitchen with a dishwasher and clothes washer and dryer. The floors are all a beige travertine and the dinning table, set for eight, is grey marble. All look out over an infinity splash pool to the same view as the bedroom. Everything is air conditioned as well as fitted with ceiling fans to give the owners a choice of cooling options.

Nevertheless, it must be said , there are a number of skeptics influenced by the fact that before Michael Drever took over, in late 2018, the project remained a partially finished construction that was an eyesore on the beach for over 8 years. Many long term residents and frequent visitors to Zihuatanejo say, “I’ll believe it when I see it.”  While progress is being made, as of mid-January 2020,  40 of the 68 villas have been sold and demolition of the old structure as well as new construction is making daily progress, satisfying these Doubting Thomas’ will be one of Michael’s biggest challenges. When I asked Michael about these comments his response was, “That’s history, this is now. It’s only a problem in people’s minds, I just ignore it and keep on building and selling.”

Conde’ Nast Traveler magazine has called the beach at La Ropa, “Mexico’s #1 beach. Sotavento Ocean Resort and Villas may be the #1 location and real estate investment opportunity on that beach. Come to Zihuatanejo, Mexico and see for yourself. You may end up being a very happy member of the Sotavento family and find yourself sitting with your toes in the silky sands of Sotavento sipping a mango margarita and watching the sun set on one of the best beaches in Mexico.

Direct flights to Zihuatanejo, Mexico are available from: USA, Minneapolis, Los Angeles, Phoenix, Chicago, and Houston. And from Canada: Montreal, Toronto, Calgary, and Vancouver. A 40 minute cab ride from the airport to anyplace in town runs $26 (US) OR $34 (CAN). Accommodations in high season (roughly November thru April) can run the gamut from a low end of about $40 us per night up to and over $500 us per night. In January and February, which is the top of the high season, accommodations can be difficult to find unless you have booked far in advance.