The Coconut Incident in Spanish Wells

Posted by Tim Cotroneo on Friday, November 6, 2015 · Leave a Comment 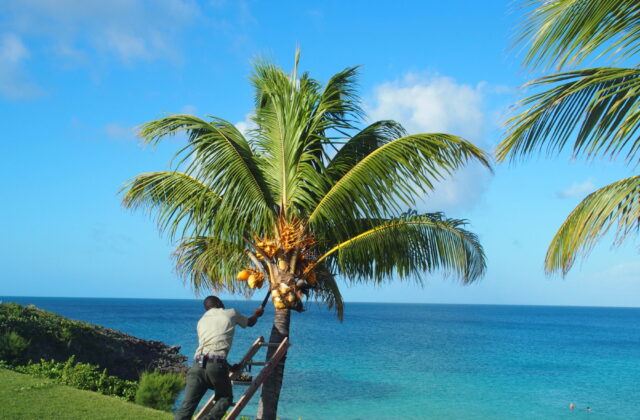 It Could Happen to You

I first became interested in coconuts when I learned of a gent known as Spiderman on the island of Nevis. While doing research for a press trip to Nevis, I read about a local employed by the Four Seasons Resort who had a unique climbing ability.

Spiderman would scale the tallest palm trees barefoot and armed only with a machete. Once at the top of a tree, he would trim coconuts considered in drop-mode, as well as palm fronds in need of manicuring. Once his coconut makeover was complete, Spiderman would shimmy down.

Unfortunately, the week I visited Nevis, the one-and-only Spiderman was on sabbatical. Perhaps he was attending a convention in Vegas with other card-carrying palm tree climbers.

Spanish Wells- A Coconut Happening
This Nevis coconut precursor brings us to the scene of the crime in tiny Spanish Wells. This 2-mile-long Bahamian Out Island is simply one of the most stylish Caribbean outposts I’ve ever encountered.

The homes on Spanish Wells resemble gingerbread houses featuring fresh coats of pastel paint. You can feel the pride in ownership on this island. What’s also unique about Spanish Wells is that golf carts are the main form of transportation. 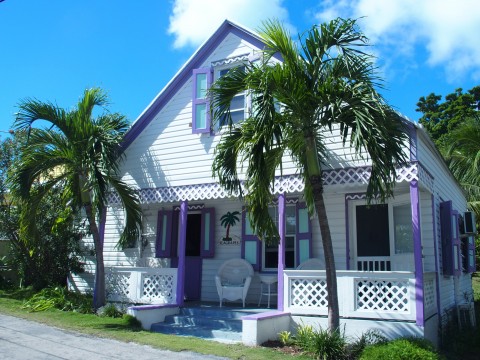 The island is only one mile in the width, so while motoring in our golf cart, about every 200 yards I’d notice an amazing glimpse of turquoise water. I would veer the golf cart in the direction of this turquoise bonanza and see awesome images like this: 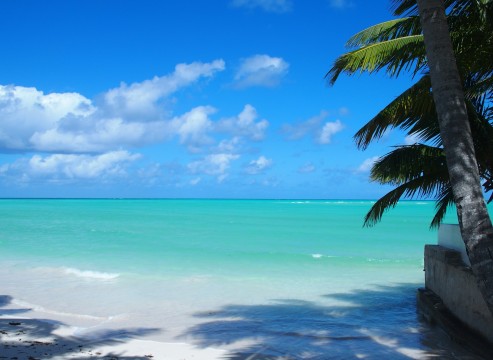 After checking out an amazing beach and shooting a few photos, my wife and I climbed back into the golf cart. Our goal was to have lunch at a restaurant we spied earlier named Buddha’s. Suddenly my wife said, “It smells like something is burning.” I replied, “It smells like sausage.” She looked at me like the dog who finished last at the airport drug-sniffing school. Then she encouraged me to stop the golf cart immediately.

I walked to the back of the cart where I noticed liquid dripping behind the right tire. After further inspection, I spotted what was causing the burning sensation. There was a coconut firmly lodged alongside the tire. 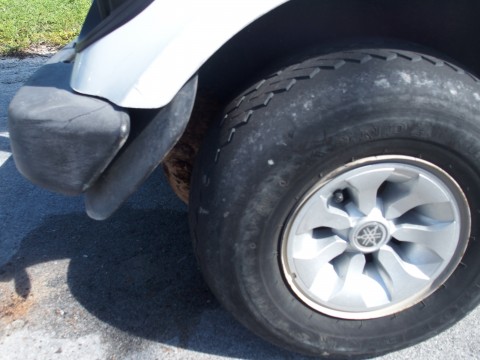 Coconut lodged to the left of tire

I tried for 10 minutes to pry the coconut from its new home. No luck. About this time a British chap named Gordon walked up to survey our predicament. Gordon asked, “What’s the problem?”

About the same time I was explaining to Gordon about our coconut close encounter, a small black pickup truck pulled over. Gordon shared with the driver how this couple from Minnesota somehow couldn’t avoid a prone coconut. The driver pulled a three-foot long black rod from his truckbed. Thankfully he chose not to practice ninja moves on me for my coconut indiscretion. Instead he dislodged the coconut in a matter of seconds. 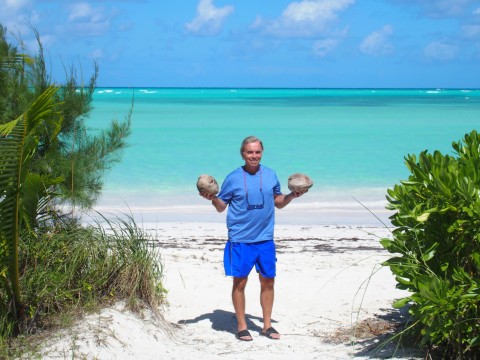 The usual suspects on Spanish Wells

The next morning during breakfast at our hotel on the island of Eleuthera, I couldn’t help noticing what was happening to my left. One of the resort employees was making like Spiderman, only he tapped the services of a ladder. 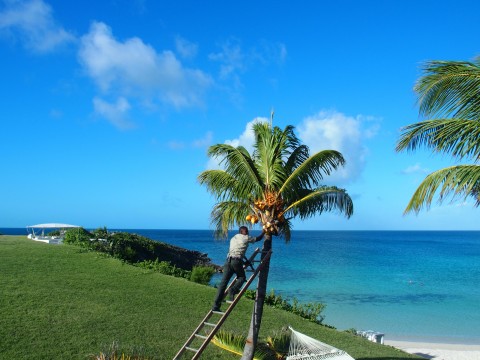 I turned my head almost 360 degrees to see if anyone was driving a golf cart on the premises. I knew that from this point forward, anytime I smelled the scent of  burning sausage, I would be compelled to warn others 0n Coconut Safety Practices 101.