Posted by Tim Cotroneo on Thursday, December 16, 2021 · Leave a Comment 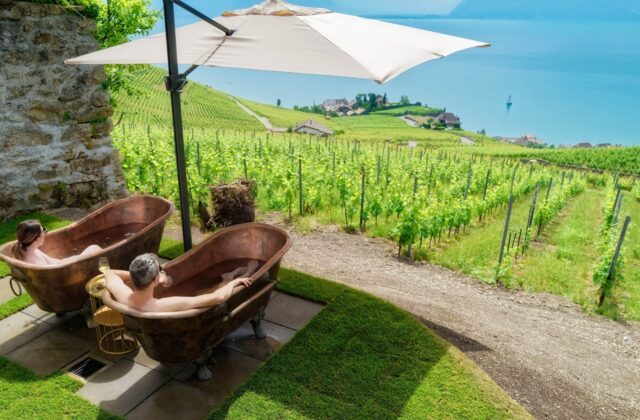 When visiting Vaud in Switzerland’s Lake Geneva region, it’s hard to know where to start when it comes to must see attractions. We thought we’d help with your itinerary and bucket list stops. Here goes with 12 Reasons to Visit Vaud in 2022:

Switzerland’s new arts district, PLATEFORME 10 in Lausanne, will be completed in June 2022. One of the most dynamic museum complexes ever to be built in the country, PLATEFORME 10 is located adjacent to the Lausanne train station in the very heart of the city, the artistic hub of the Canton of Vaud. 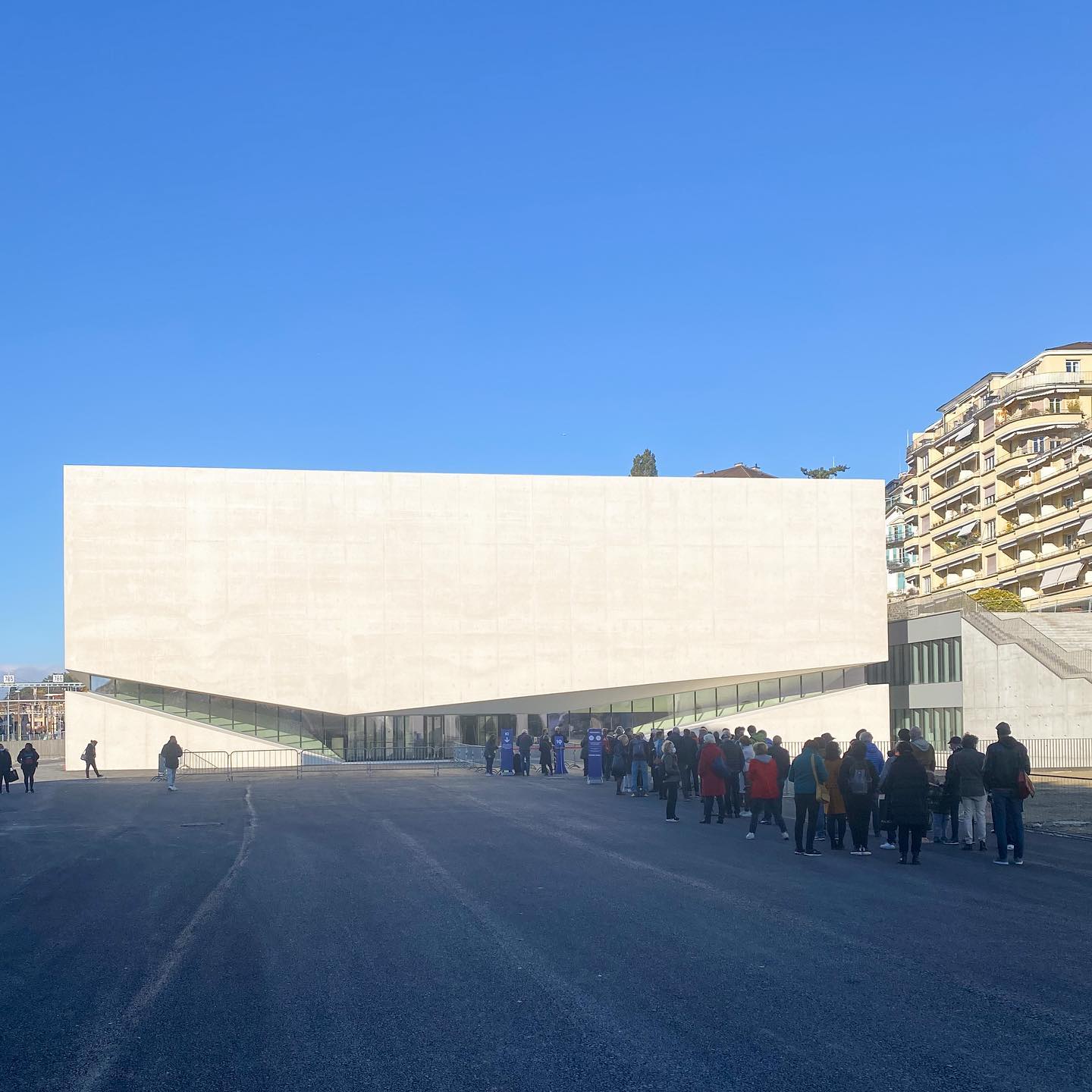 The first phase of the complex, the Musée Cantonal des Beaux-Arts (MCBA or Cantonal Fine Arts Museum), opened in October 2019. In 2022, two other museums, the Musée de l’Elysée (the canton’s photography museum) and mudac (the Museum of Contemporary Design and Applied Arts) are scheduled for completion. PLATEFORME 10 is the hub of a new “arts district” for the city and bring together, in a single location, three museums that formerly inhabited disparate buildings throughout the city. Built on the site of former locomotive sheds in Lausanne, PLATEFORME 10 merges fine art, photography, design, and textile arts into one 237,000 square foot campus, providing each museum with increased and exhibition space. 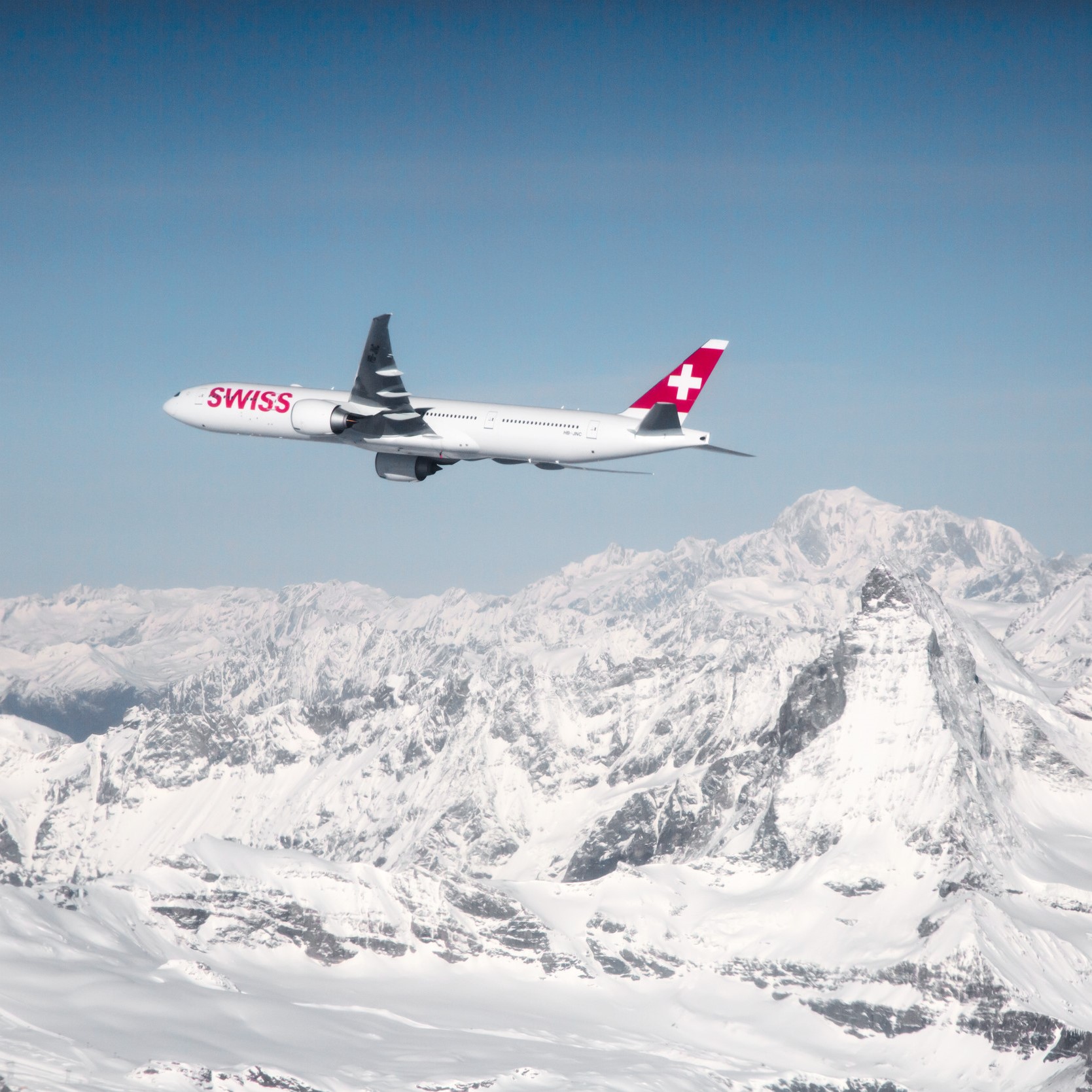 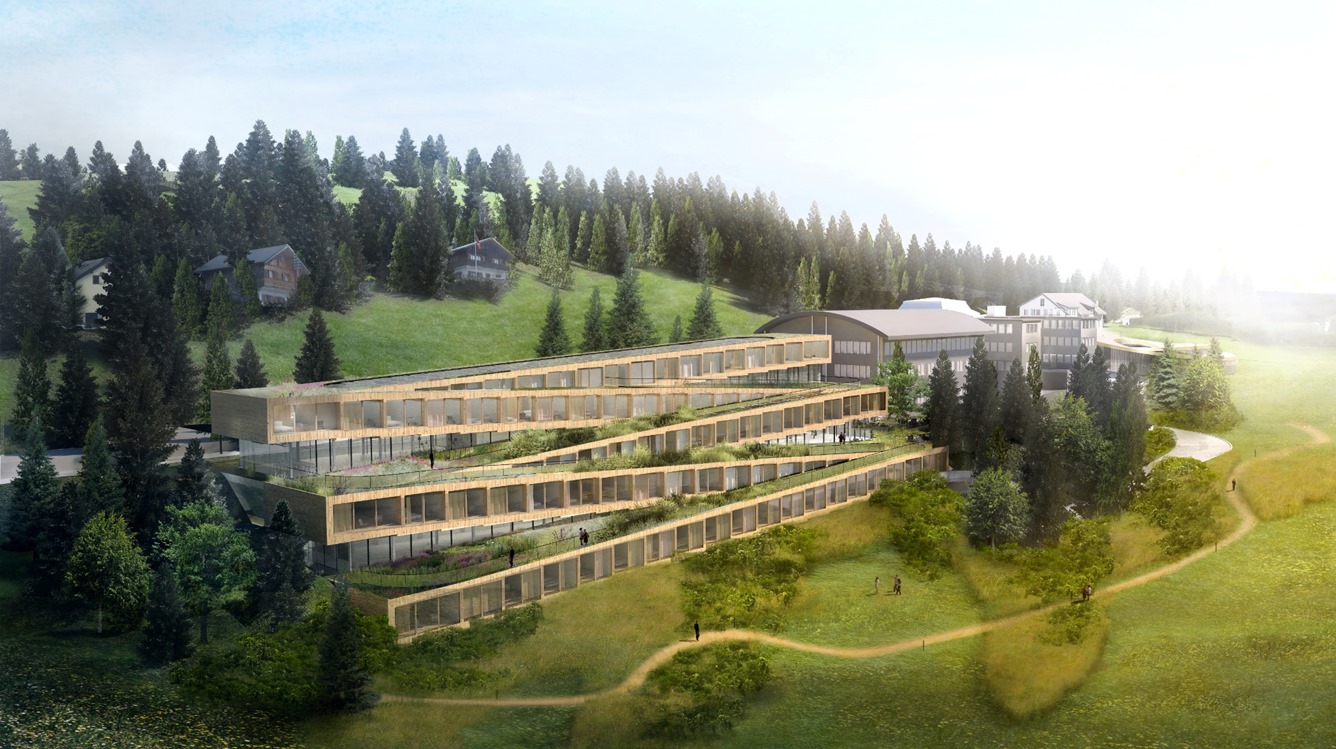 Hôtel des Horlogers, the “watchmakers hotel,” will open in Le Brassus in March, 2022. Adjacent to the Musée Atelier of Audemars Piguet, which opened in June 2020, the 4-star hotel is built in the shape of a “Z” and will house 50 rooms and suites, conference rooms, several restaurants, a bar, a café lounge and a wellness area. Located in the heart of Swiss watchmaking, the hotel is the only establishment of its kind in the Valley and will attract both business and leisure guests to the shores of Lac de Joux. The project was designed by BIG | Bjarke Ingels Group, who also designed the Audemars Piguet Musée Atelier. 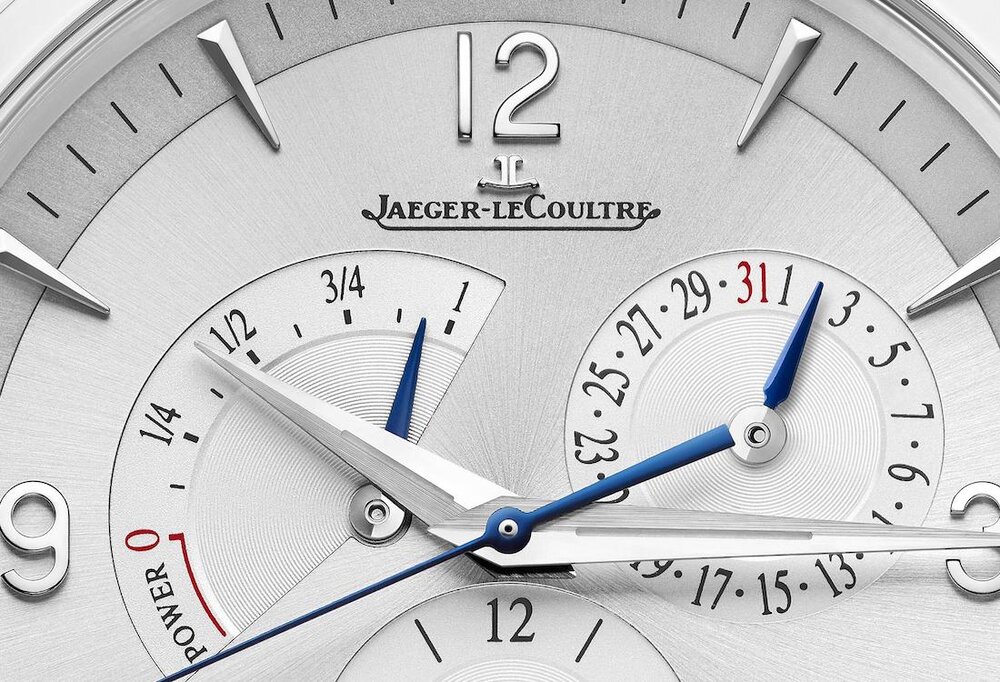 Famed watch and clock manufacturer Jaeger-LeCoultre has at long last opened its doors to the public. The luxury timepiece manufacturer, founded in Le Sentier in the Vallée de Joux at the beginning of the 19th century, is now welcoming visitors.

The company is offering workshops in the L’Atelier D’Antoine, named after the Maison’s founder, Antoine LeCoultre. L’Atelier D’Antoine stages a variety of educational programs that combine academic instruction and practical activities, guided by experts from within the Manufacture.

Discovery Workshops provide an opportunity to explore the world of Swiss fine watchmaking in a new way. Limited to a maximum of eight participants, these workshops are hosted by an instructor and a technical expert. Over the course of three hours, participants discover the myriad technical and creative skills required to produce fine watches, the different stages involved in their fabrication, and the artistic crafts employed in fine watchmaking.

The Manufacture Visits are structured so that each one focuses on a different area of Jaeger-LeCoultre’s expertise and heritage: The History of the Maison and the Stages of Watchmaking; Innovations and Inventions; and Creativity and Artistic Crafts.

Lausanne has been ranked 19th in the QS Top Universities list of the best student cities in 2022. The city is home to the University of Lausanne, as well as the EPFL (École Polytechnique Fédérale de Lausanne), the country’s second-largest polytechnic. Lausanne is also host to the IMD Business School, whose programs have topped the Financial Times ranking for almost a decade.

The EHL (École Hôtelière de Lausanne), the world’s best hotel school, is located in the Vaud capital. In addition, the region is home to four other hotel schools that are ranked among the world’s top ten: the Glion Institute of Higher Education (3rd), the Swiss Hotel Management School (SHMS) in Leysin (4th), the Hotel Institute Montreux (6th) and finally the IHTTI School of Hotel Management in Caux (10th). The private establishments contribute one and a half billion francs a year to the economy of the canton of Vaud.

In the gastronomic mecca of Vaud, known for its high concentration of Michelin-star restaurants and globally ranked kitchens, 14 Vaud chefs have been singled in the 2022 GaultMillau awards. 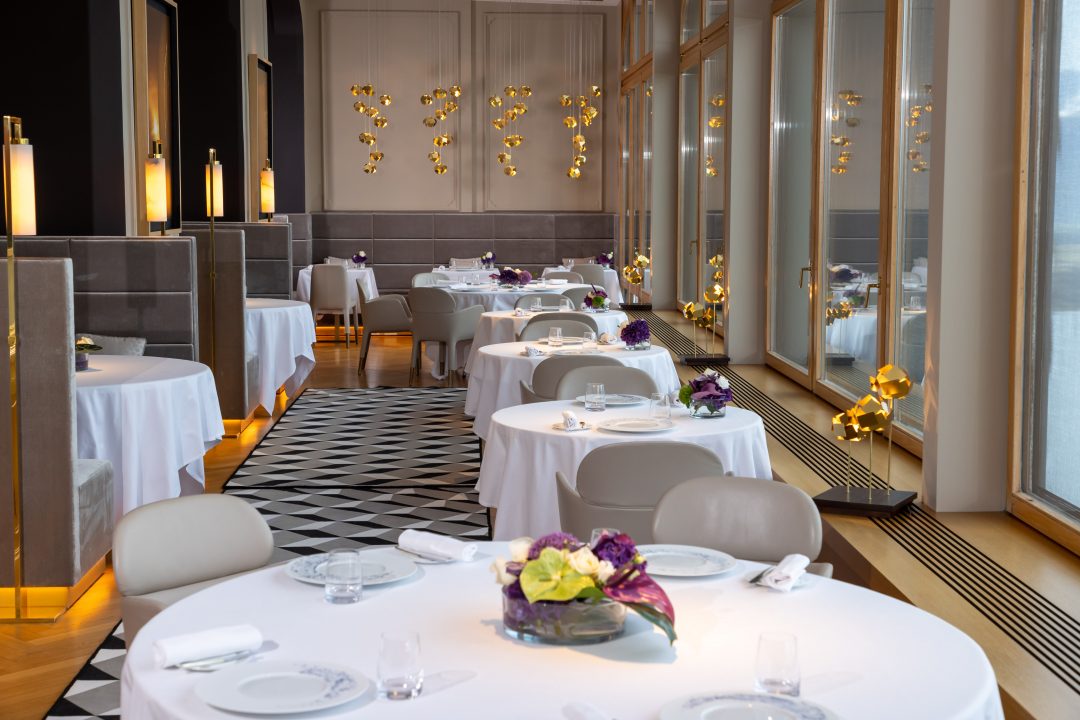 This year, after a decade of success in the kitchen of the Pont de Brent above Montreux, Stéphane and Stéphanie Décotterd have taken on a new challenge. As of September 2021, they have announced the creation of two “Stéphane Décotterd” restaurants located at the Glion Institute of Higher Education in the former Bellevue Hotel in Glion. The two-star Michelin chef has opened Maison Décotterd (above) and Le Bistro. Overlooking Montreux and the Vaud Riviera, the Belle Époque building has been the center of Glion for more than a century and has housed the prestigious hospitality management school since 1962. This unique setting now hosts the gastronomic restaurant that has made the Décotterds famous, as well as a contemporary bistro. Both establishments have a spectacular view of Lake Geneva and the Alps. They just received 18/20 points from GaultMillau. 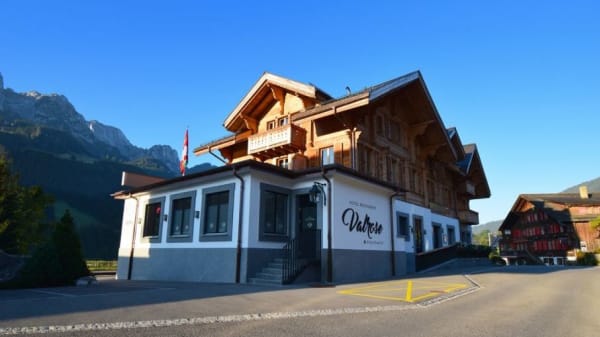 Benoît Carcenat, the predecessor of the Décotterds at Glion, has moved on to the Table du Valrose in Rougemont, where he is now adapting regional flavors to modern cuisine and was just awarded 17/20 points by GaultMillau. He is the second high profile chef to arrive in town, the first being Edgar Bovier, who has been at the helm of the restaurant Le Roc by Edgar Bovier at the Hôtel de Rougemont since leaving the kitchens of the Lausanne Palace. GaultMillau awarded him 15/20 points. 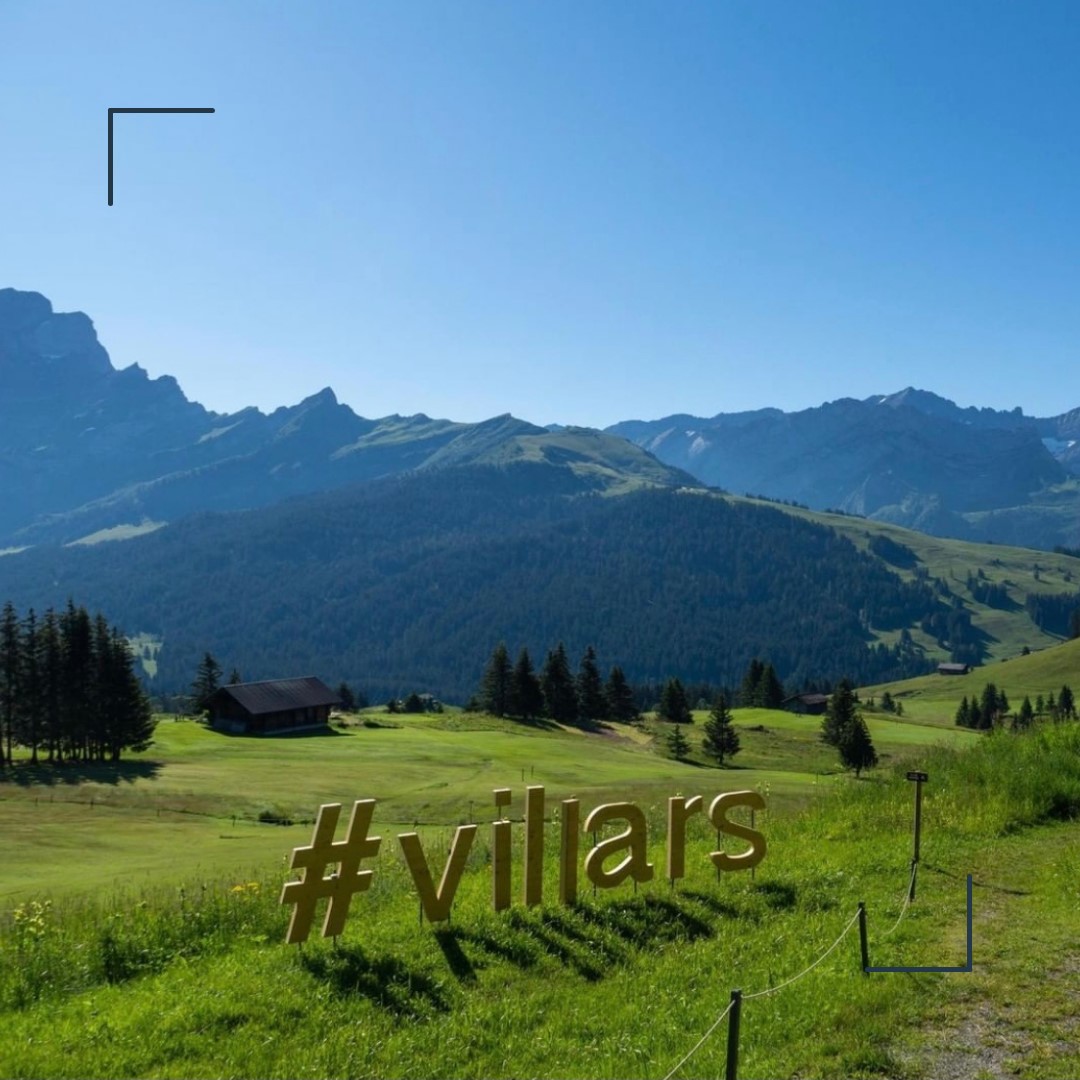 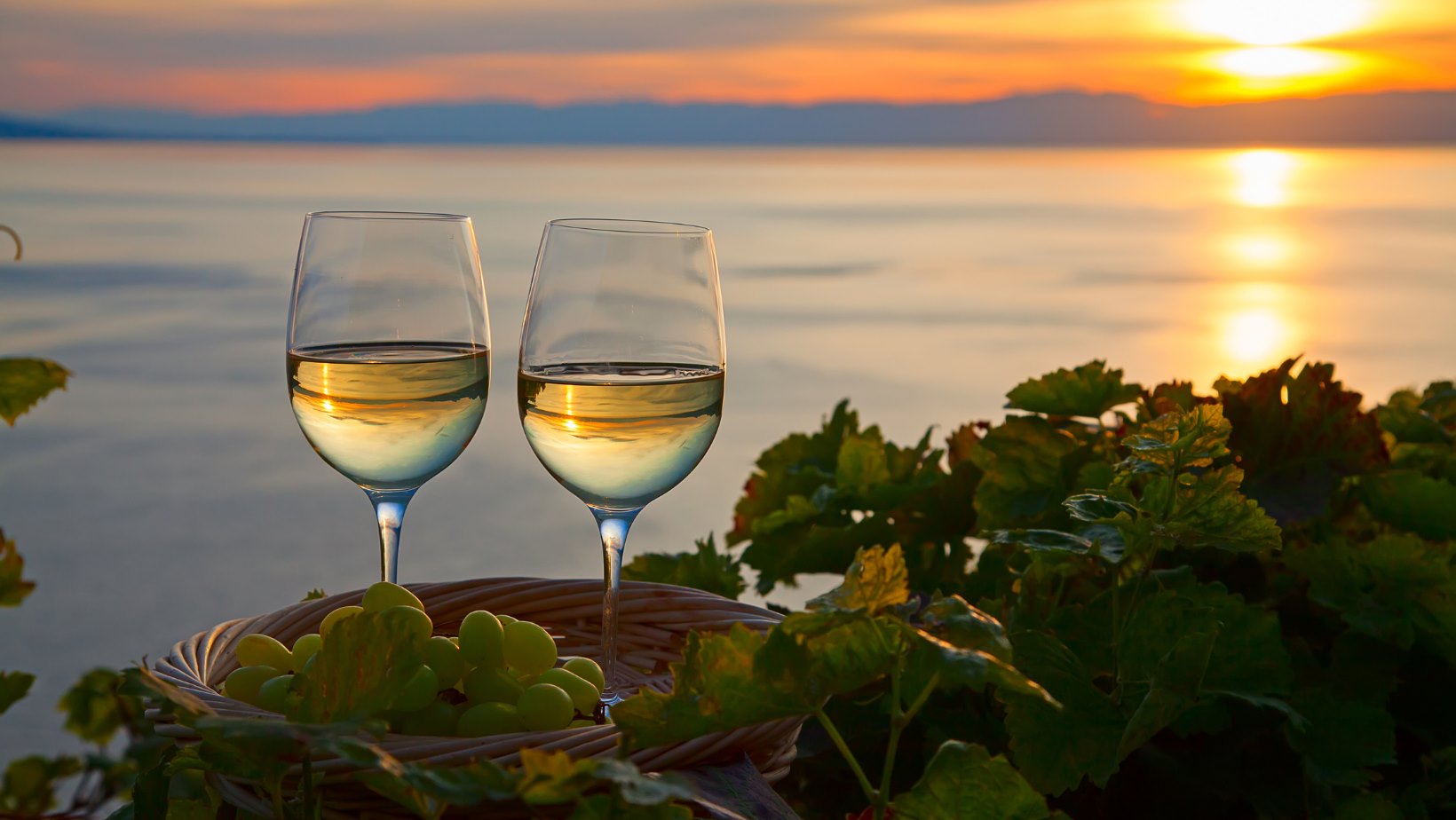 La Vigne: Swiss Wine Therapyis a new, mobile pop-up spa in the Lavaux that can currently be found at Domain Bovy in Chexbres. The spa offers wine-based treatments overlooking the UNESCO World Heritage Site vineyards, with a panoramic view of Lake Geneva. There are copper bathtubs to start the relaxation process, as well an exfoliation treatment using grapes and a body treatment that utilizes the lees of Chasselas. The La Vigne spa has just received the Prix de l’innovation Vaud Œnotourisme for this project, which will reopen in spring 2022. 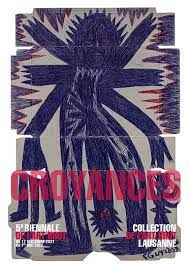 The 5th Biennial of Art Brut at Collection de L’Art Brut Lausanne revolves around the theme of “beliefs” and will delve into the interconnections between the creators of Art Brut, religion and the occult. Each artist in the Art Brut movement was a self-taught creator, often on the fringes of society, people who transcended difficult living conditions in their lives. Jean Dubuffet was perhaps the best known figure. The works on show include illustrations of divinities, saints and other religious figures, as well as abstract compositions, paintings of a symbolist nature and objects for use in rituals. The exhibition runs from December 17, 2021 to May 1, 2022.

The Fondation de l’Hermitage is unveiling Treasures of the Fondation des Treilles for the first time in Switzerland. This is a selection of the greatest masterpieces from the Fondation des Treilles, which was established in Tourtour, in the south of France. It is based on the prestigious collection created by a visionary patron of the arts, Anne Gruner Schlumberger (1905-1993. Among the artists represented are Hans Arp, Georges Braque, Victor Brauner, Jean Dubuffet, Max Ernst, Alberto Giacometti, Paul Klee, François-Xavier Lalanne, Fernand Léger, Pablo Picasso, and Yassilakis Takis. More than a hundred paintings, drawings, engravings, sculptures and objects will be on view in Lausanne. The exhibition runs from January 21 to May 29, 2022. 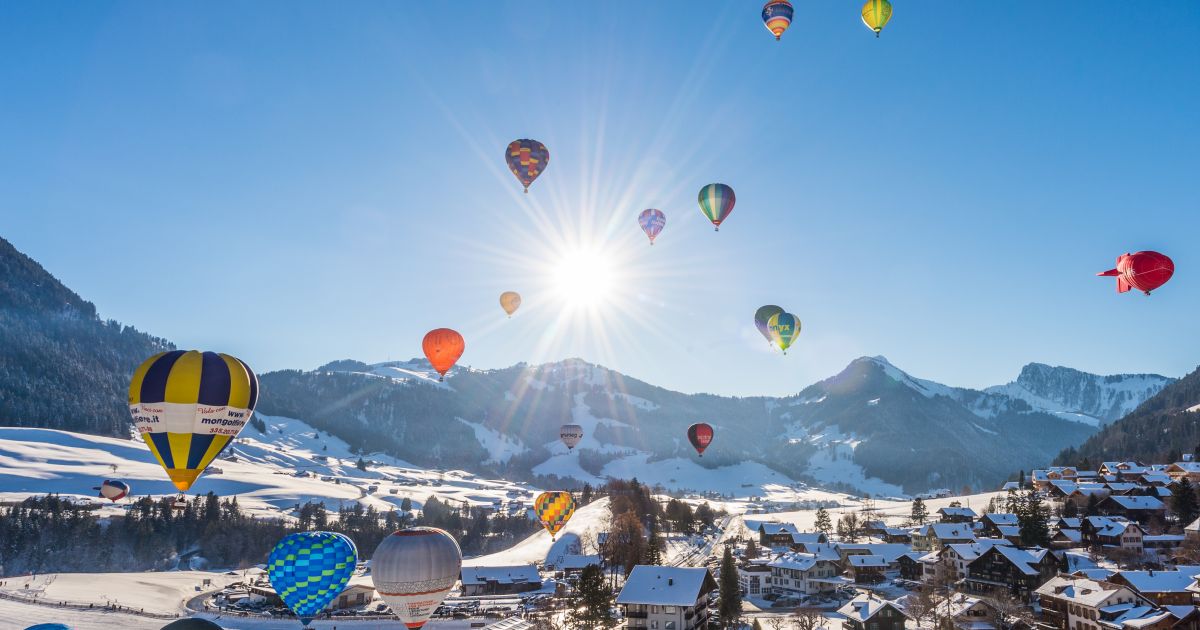 The village of Château-d’Oex is celebrating the 43rd annual Festival International de Ballons from January 22 to 30, 2022. The charming resort village will be transformed into the hot-air balloon capital of Switzerland, attracting balloonists and hot air balloon fans from all over the world. Balloonists from some 20 countries will attend, flying almost 100 hot-air balloons. The highlight is the Night Glow event, a sound and light show that includes 20 hot-air balloons, paragliders, members of the Swiss Ski School and pyro technicians who work together in a unique Alpine performance. This year’s event will also include the screening of award-winning films at the Diablerets International Alpine Film Festival (FIFAD), as well as a series of lectures. The town is famed as the starting point of the first successful around-the-world balloon journey, made in 1999 in the Breitling Orbiter by Bertrand Piccard and Brian Jones. 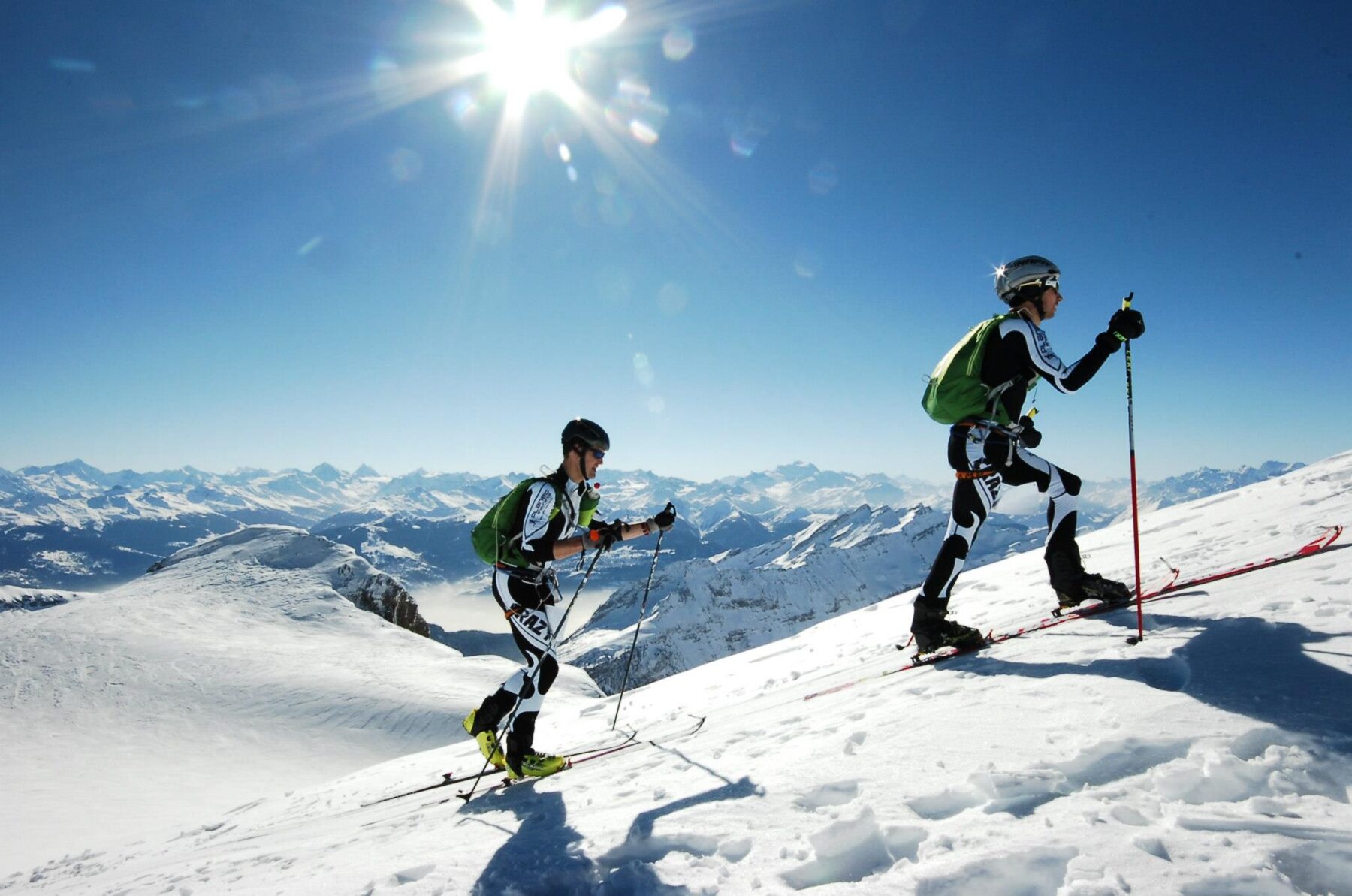 Glacier 3000 has a newly designed snow park (above) with a beginner’s area. The snowpark is overseen by Ravach Parks, under Benjamin Ravanel and his team. They also designed the snowpark for the Lausanne 2020 Youth Olympic Games, as well as those at Tignes and Meribel. Now that there are snowparks in Villars, Les Diablerets, and Leysin as well as Glacier 3000, the Vaud Alps can now offer freestyle from November to April.

On March 5 and 6, 2022, visitors to Les Diablerets in the Vaud Alps can look forward to 3D Les Diablerets, one of the main ski touring races in the region of Vaud. During the competition, the best skiers will compete over four challenges courses ranging from the Verticale (3.5 km and 558 meters of altitude) to the Super diabolic (28 km and 2,632 meters of altitude).

Leysin has made a name for itself as a freestyle location and will host the Park & Pipe 2022 World Junior Championships from March 6 to 13, 2022. The program includes competitions in the disciplines of slopestyle, big air and half-pipe. Visitors looking for a thrill should make sure to try the Tobogganing Park, which offers an array of snowtubing slopes designed by Olympic medalist and world bobsleigh champion Silvio Giobellina, together with giant inflatable tubes. 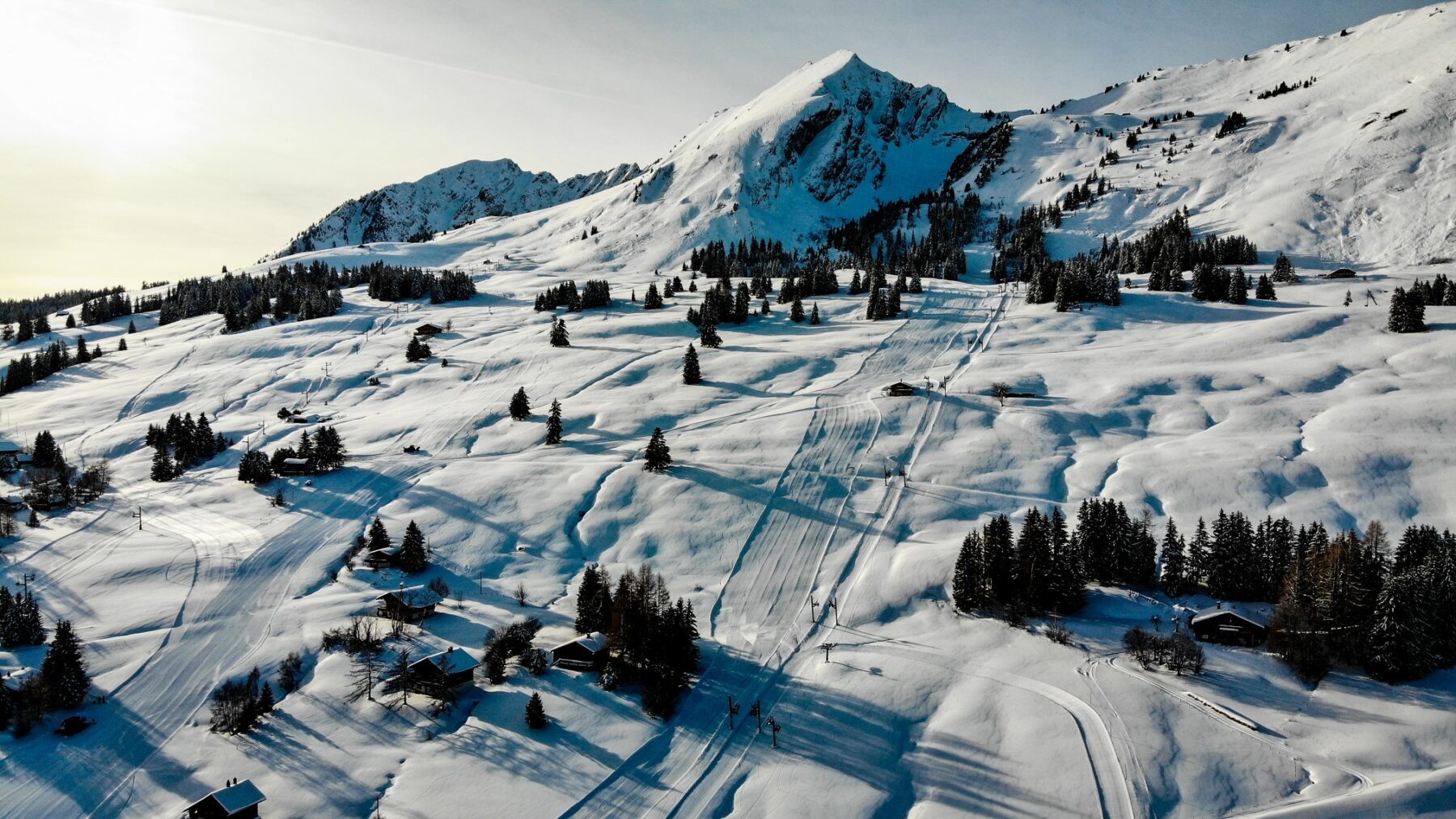 The region of Aigle-Leysin-Col des Mosses is known for its beautiful sunshine and revolving restaurant, the Kuklos, and hosts an international sled dog race every March. A must for all mushers, this event is great for families, with a host of activities on offer, including driving instruction and sleigh rides. The Swiss Biathlon Cup is also an annual event, and is held on the Les Mosses-La Lécherette plateau.

The occasion provides an opportunity to try the sport, which is highly popular in the region and combines rifle shooting with cross-country skiing.

On the Jura side, just 20 kilometers from Nyon and Lake Geneva, Saint-Cergue offers a different perspective with the Jura sur Léman, the only cross-border ski resort in the region. Overlooked by the French-Swiss summit of La Dôle, it offers an exceptional view of Lake Geneva and the Alps. On March 5 and 6, 2022, Les Rasses will host the Mara, a highly popular cross-country skiing marathon. 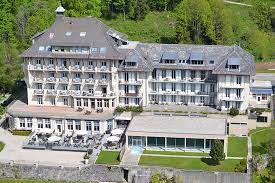 Cross-country skiers and snowshoe enthusiasts will be in their element in the vast snow-covered and wild landscapes typical of the Vaud Jura, extending as far as the Vallée de Joux.

The Val Pass is included in the cost of an overnight stay in Vallée de Joux area. This gives free access to 142 kilometers of cross-country ski trails between the Mollendruz and Marchairuz passes, Risoud forest and the shores of Lake Joux.