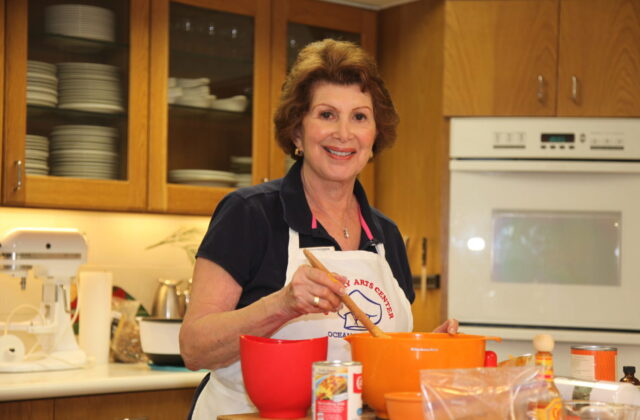 Julia Child’s “The French Chef “was one of the most popular television shows of the 60s and early 70s. Newly married and an aspiring cook, Carole Kotkin found herself mesmerized by Child’s culinary mastery.  When Kotkin learned her idol would be appearing in her hometown of Miami, she couldn’t wait to see Child in person.

At the conclusion of Child’s sold-out Miami speaking engagement, television’s first celebrity chef asked if anyone in the audience had a question. Kotkin felt this was a once in a lifetime opportunity to connect with the cooking icon. Kotkin inquired, “What could I do to learn more about cooking?” Child’s response would ultimately serve as a catalyst and springboard to Kotkin’s food career covering nearly four decades of teaching, writing, and hosting a radio talk show.

It was 1976 when Child suggested Kotkin attend a new Paris cooking school named after one of the founders of modern French cuisine. Kotkin was thrilled with the idea of attending the fledgling La Varenne, and she packed her bags to begin training for a career in the culinary arts. 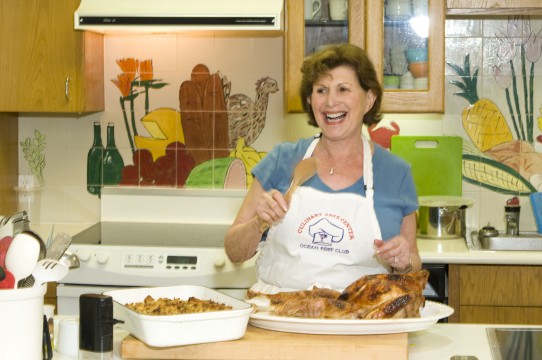 After returning to the U.S. with a culinary degree from La Varenne, Kotkin started up a cooking school in Miami. About the same time Kotkin’s school opened its doors, a new wave of premium cooking merchandise and award-winning wines hit the American market. Kotkin thought she could add revenue to her cooking school’s bottom line by selling high-end products like the Cuisinart food processor, as well share what she knew about the wines of France and beyond.

Time-saving kitchen products and Kotkin’s insights on fine wine were a big hit with cooking school attendees. Kotkin’s teaching reputation gained quite a following in the Miami area, and she parlayed this success into magazine and newspaper articles focusing on her favorite recipes.

By 1990, Kotkin had sold her school and began devoting more time to writing food and travel articles for several Miami publications. The Ocean Reef Club, a South Florida private club and residential community, reached out to see if Kotkin would be interested in starting a new cooking school. With a fresh game plan in mind, Kotkin started anew at this Key Largo-based club featuring nine restaurants on its 2,500 acres. 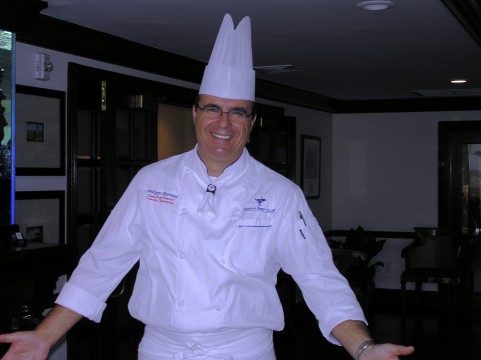 Remembering the drawing power Julia Child had with audiences years before, Kotkin tapped into the high profile chef network she had cultivated during her previous decades in the culinary industry. The Ocean Reef Cooking School began showcasing a Chef lineup that read like a culinary Who’s Who. Kotkin’s high-profile chefs propelled the school into a sold-out weekly event for club members and guests. The audience was literally hungry to learn recipes and cooking nuances from the James Beard award-winning chefs wooed by Kotkin.

Speaking at the Ocean Reef Cooking School became a winning proposition for not only chefs, but also cookbook authors, and winemakers. After teaching audience members how to prepare delicious five-star meals, the A-list cooking stars found the festive three-hour Ocean Reef Club events to be a great place to sell their books.

Kotkin’s relationship with food and wine industry legends would serve as a dynamic talent source for her syndicated Miami Herald newspaper column, as well as her Food & Wine Talk radio program. Like the food pyramid designed to create a healthy diet, Kotkin had figured out a business plan in which each of her career moves could meld into a potential revenue stream for the next. All the while, Kotkin is doing something she loves.

You’ll Know When the Recipe is Right 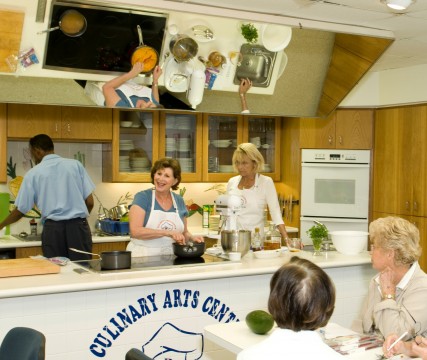 Kotkin’s business vision of today seems to run well in advance of her cooking, writing, and talk show calendars. This knack for stoking the business pipeline is particularly evident by the way Kotkin gauges the success of an Ocean Reef Cooking School event. “I love it when students’ dinner plates are clean, they have smiles on their faces, and I learn they’ve already signed up for the next class,” Kotkin said.

One way Kotkin’s cooking passion stays ignited is by the morsels of knowledge she gleans from her ever-expanding network. Whether she’s teaching a class, writing a column, or engaging with guests on her radio talk show, the teacher is always learning.

Julia Child’s Miami-raised protégé has discovered that a solid business model isn’t all that different from a great dining experience. If your customers believe they’ve received exceptional service, the best ingredients, and return home feeling satisfied, they’ll hungrily come back for more.
http://www.oceanreef.com/Dining/Cooking-School-1970.html

Tim Cotroneo is a Minneapolis-based writer specializing in travel, business, and golf.

One Comment on “Chefs Eat, Play, and Cook, in Key Largo”