Posted by Tim Cotroneo on Tuesday, December 25, 2018 · Leave a Comment 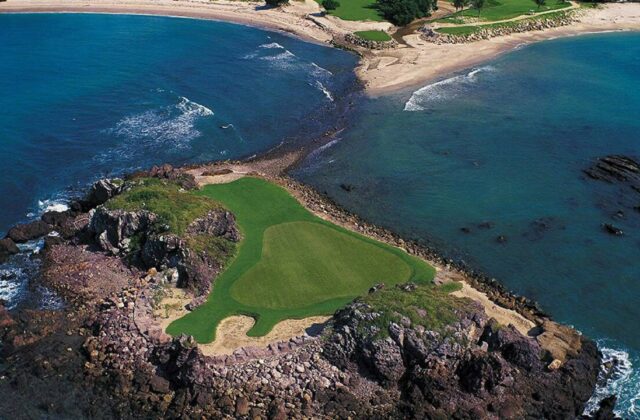 Jack Goes All in On Pacifico
By Tim Cotroneo

When you are the greatest name in golf, you tend to hold all the cards.  In 1999, that’s the position Jack Nicklaus was in when the DINE Real Estate development team in Mexico’s exclusive Punta Mita region tugged at his sleeve and requested, “Please design our new golf course.”

The DINE developers quietly held a bit of leverage with the Golden Bear. Nicklaus was offered Punta Mita’s best of the best to apply his design magic. That’s saying a lot when you consider Punta Mita is comprised of 1,500 choice acres almost completely surrounded by the Pacific Ocean and Bandaras Bay. So the question was, “Jack, do you think you could do something special here? 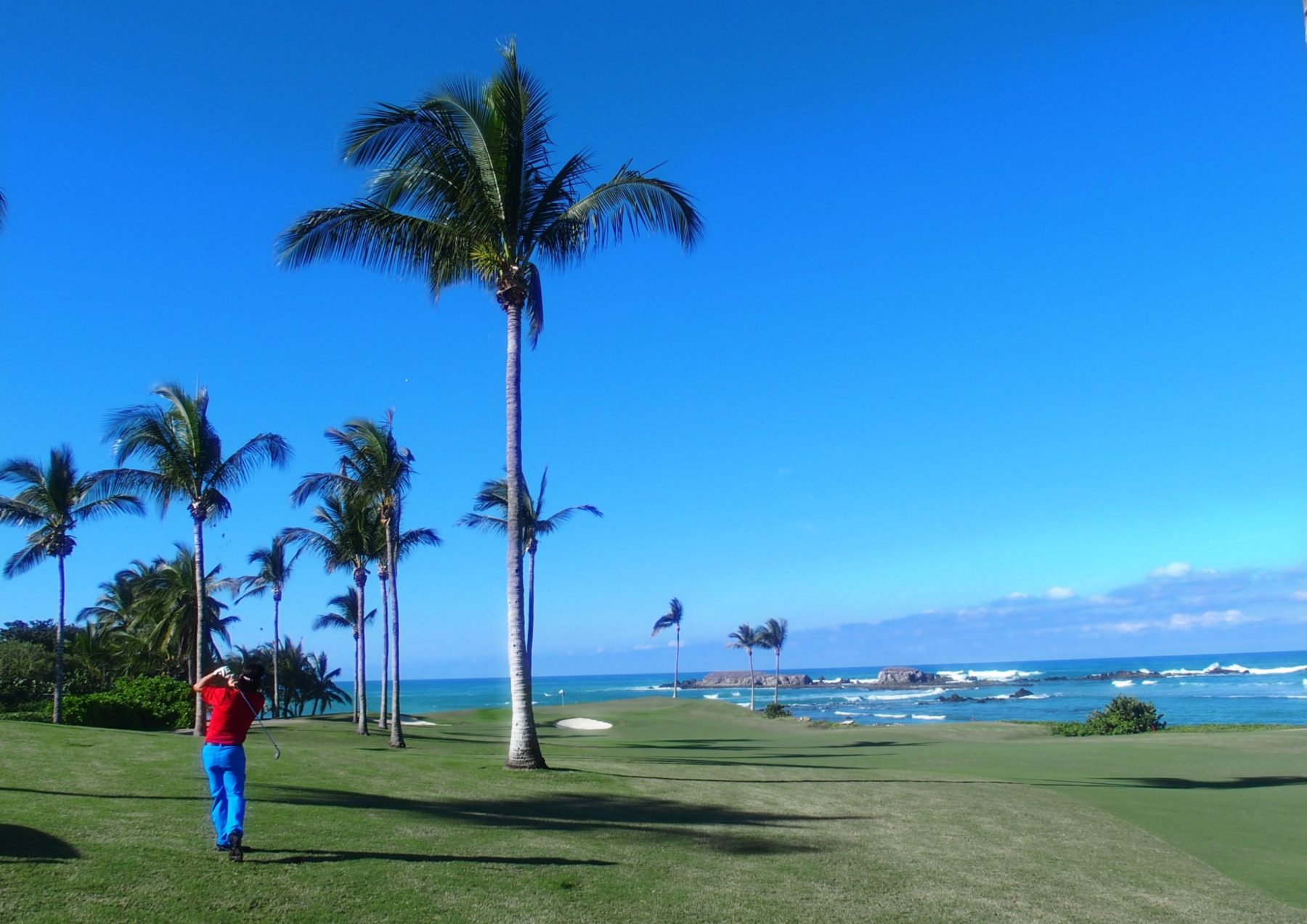 Fast forward to today and golfers from around the globe flock to the 7,100-yard Pacifico Golf Course which features no fewer than seven ocean holes. Nicklaus was handed a blank canvas that happened to include magnificent ocean views, awe-inspiring vistas of the Sierra Madre mountains, and two of the most luxurious names in hospitality located next door offering accommodations. 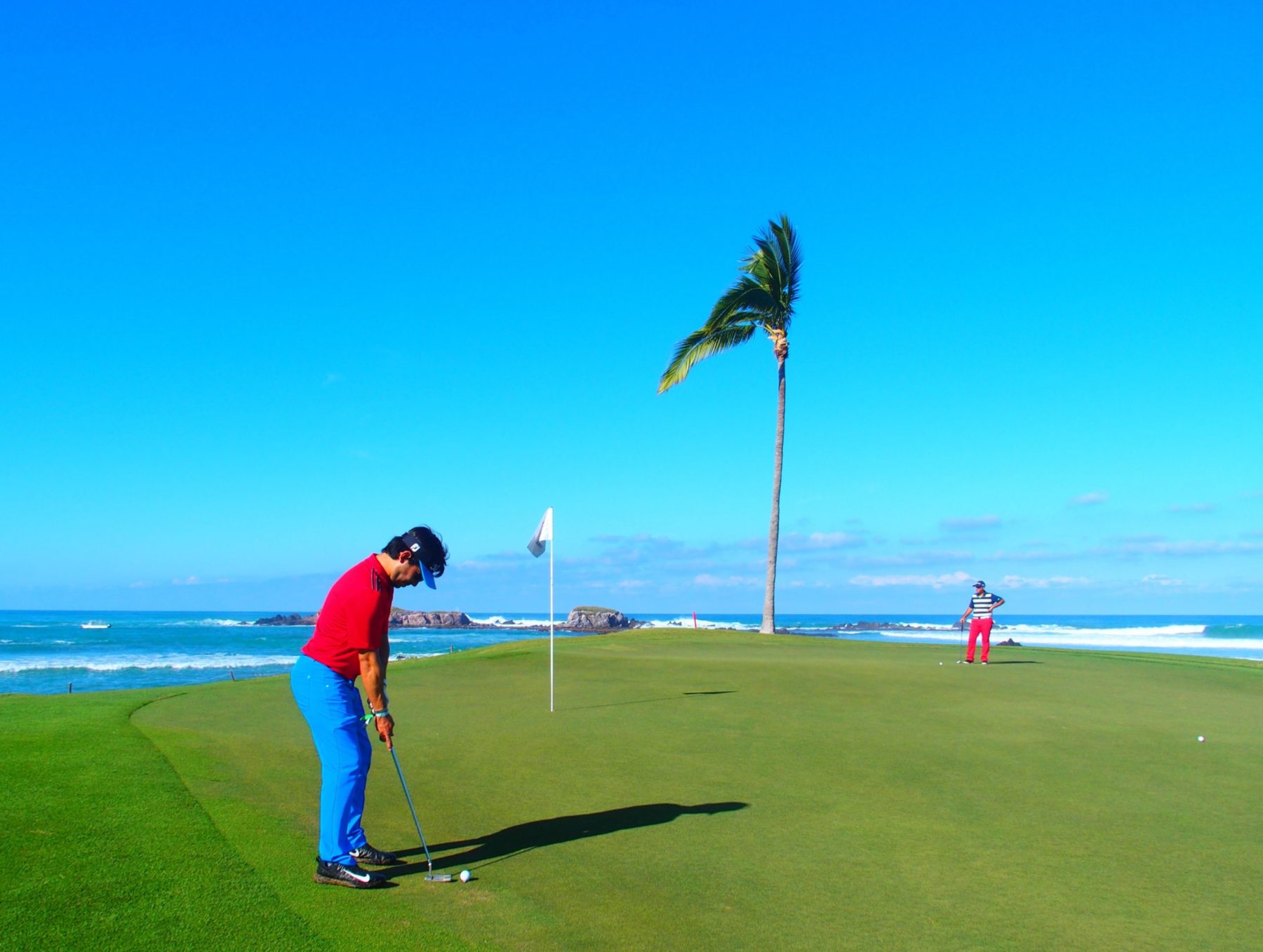 If you think that the DINE development team are good poker players, you’d be right. What’s one way to assure that golfers are lured to your golf course? How about positioning a Four Seasons Resort and a St. Regis Resort a mere three wood drive from your first tee box. After a satisfying day playing one of the most beautiful courses in all of Mexico, perhaps you’ll enjoy hunkering down at not one, but two Five Star resorts with around the clock service. Not enough? How about we throw in miles of beach, a plethora of restaurants, and a spa? 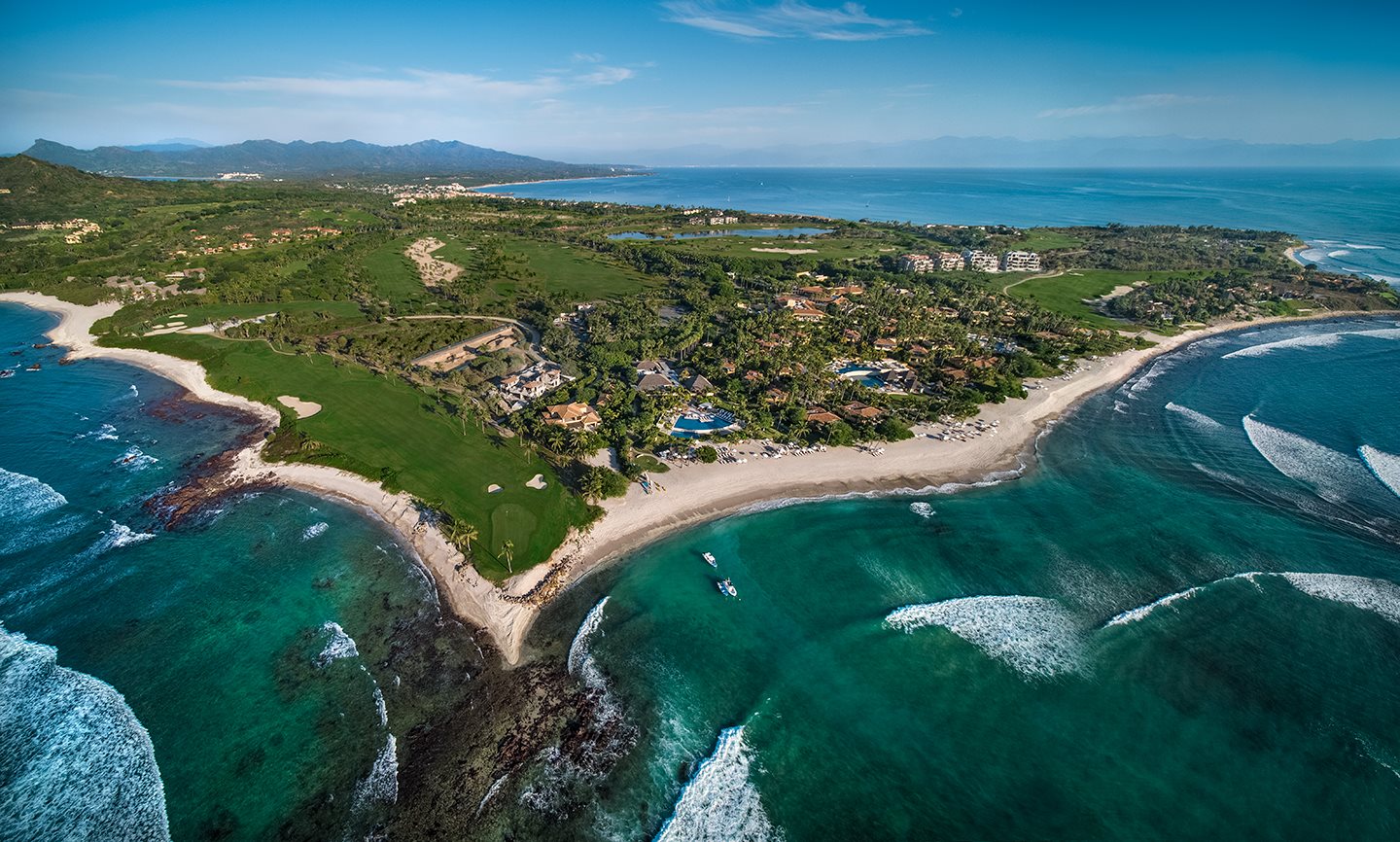 Once you’re comfortably checked in at the Four Seasons or the St. Regis, the Pacifico course sneaks up on golfers in the quietest way possible. The silence is deafening on the Par 4, 421-yard first hole. The air is so quiet it’s like the 40-foot palm trees are ambassadors to an upscale al fresco library. On a trademark Riviera Nayarit sunny day, the silence, the air, and the lush green Bermuda fairway makes golfers appreciate their odyssey to see what Jack built. First impressions are huge at Pacifico. 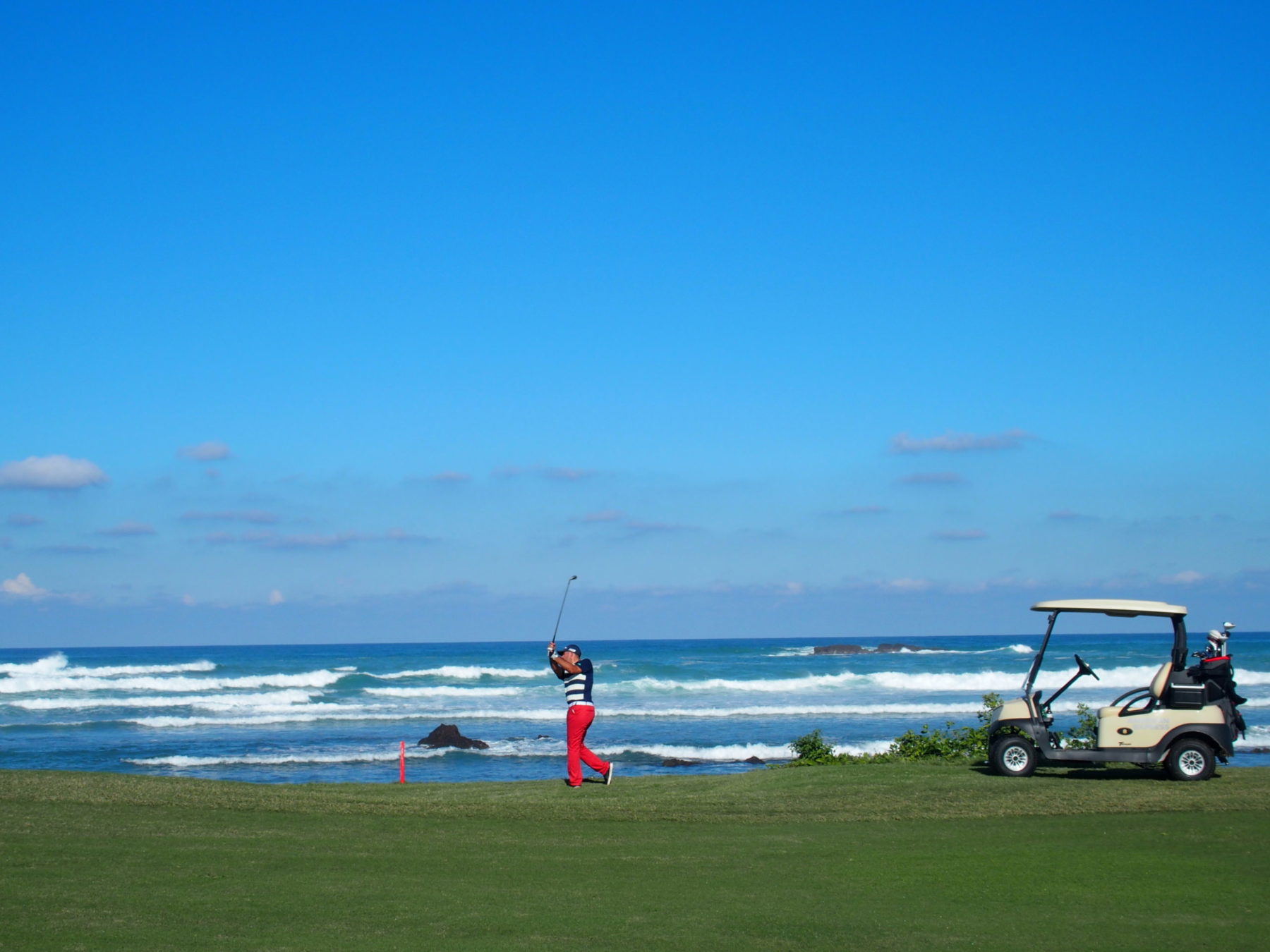 The quiet continues until the Par 3, 181-yard 3rd hole. That’s your first glimpse of Nicklaus the artist. Behind the green you’re welcomed by the sound of ocean waves and the sight of the Pacific in all its turquoise glory. The good news is this sensory embrace is just an auditory and visual appetizer leading up to Nicklaus’ grand architectural entrée.

Tail of the Whale 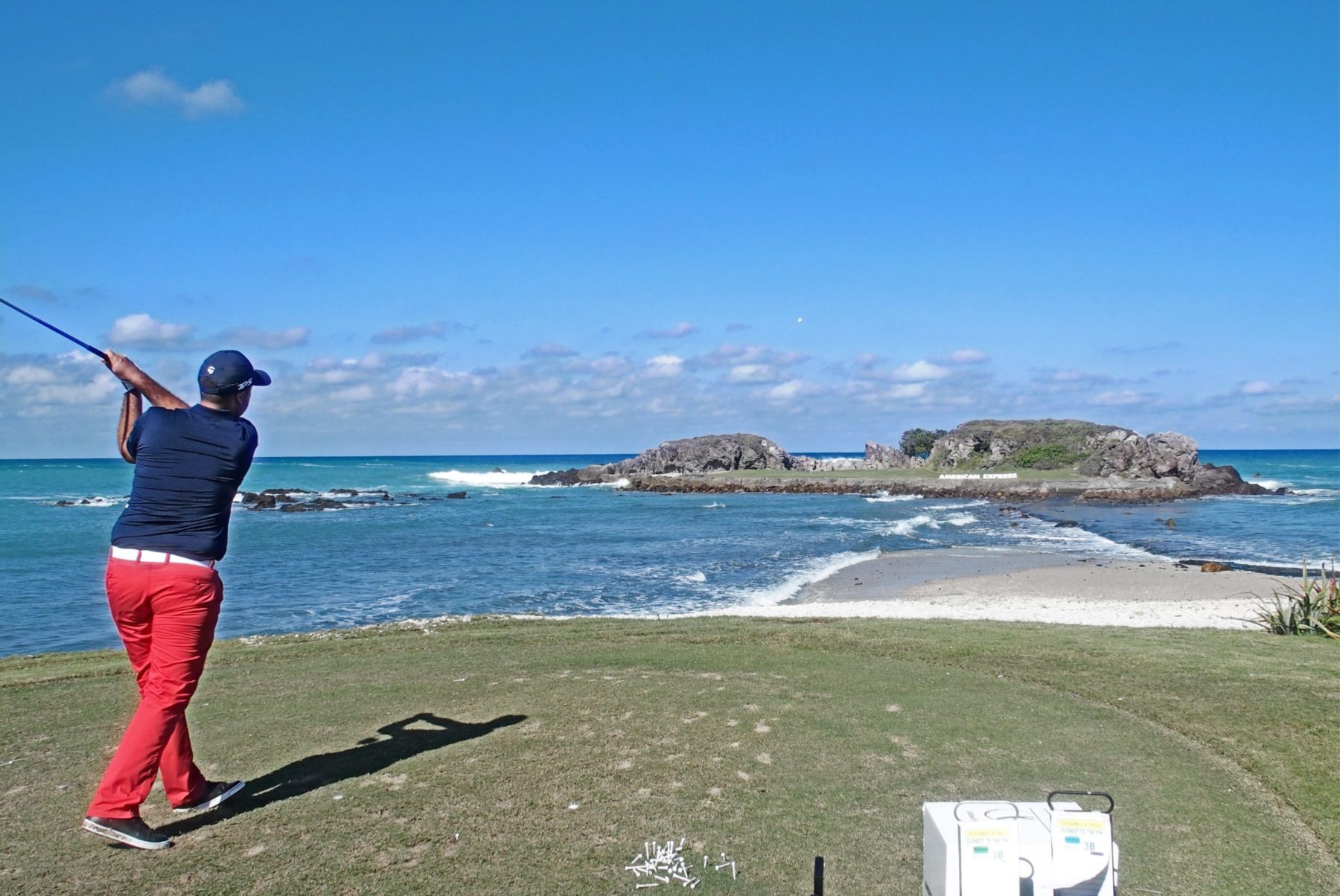 Hole out on number three and walk fifty yards to your right. There it is: The Tail of the Whale. For most golfers who’ve made reservations at Pacifico, at least part of the reason is to take on the course’s 19th hole. What do you mean 19th hole? The Tail of the Whale is considered hole 3b, a 190-yard extra hole that translates into a pure adrenaline rush.

Golfers step up to the tee box and stare at an island green that’s all carry over the Pacific Ocean. There is no bail out. You’re either on the green or in the drink. This is golf in its rawest, all-natural form. The legacy of Pacifico’s hole 3b is it’s also a golf photo keepsake you won’t soon forget. 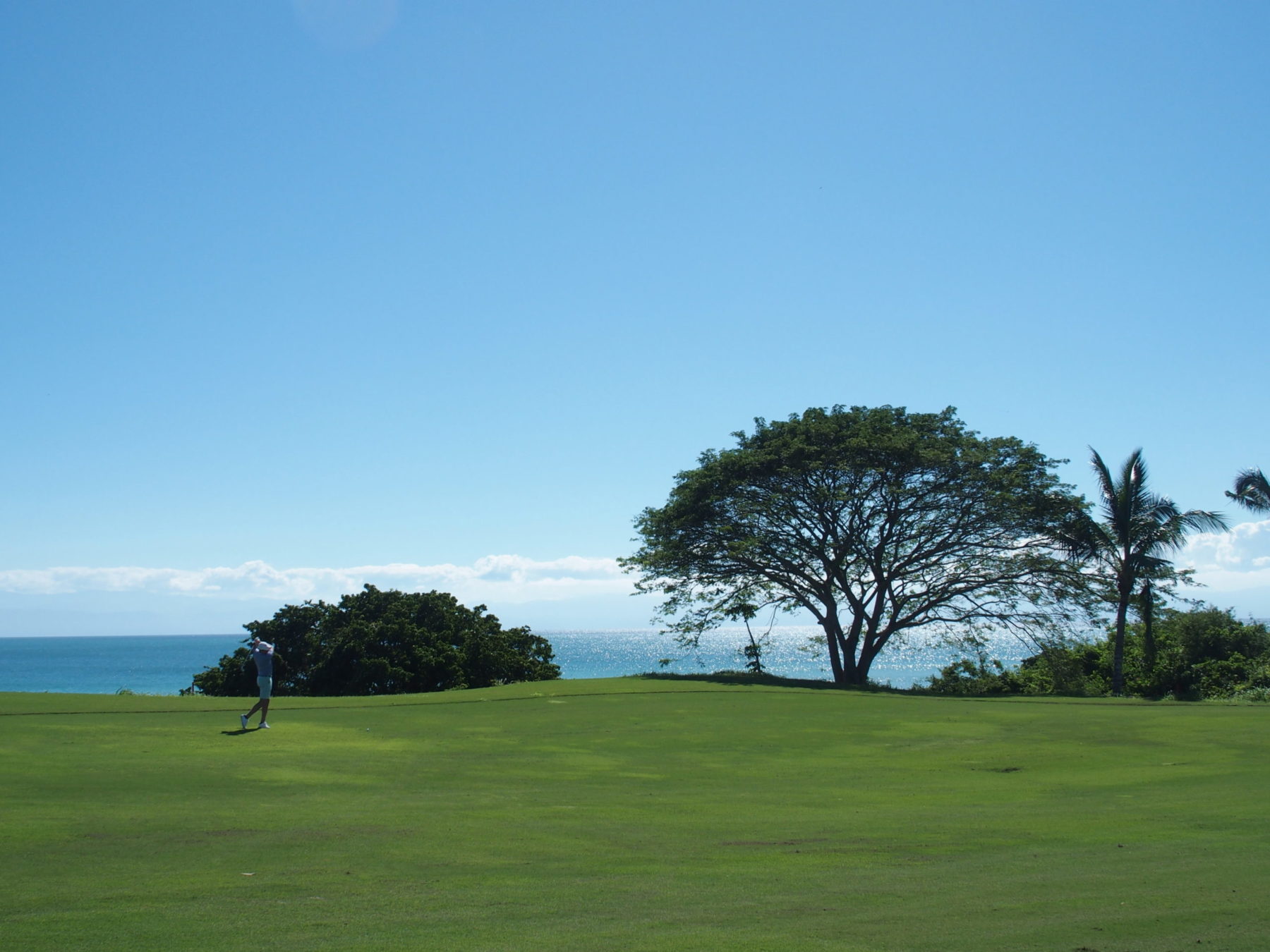 Glistening is the word that jumps out on the Par 4, 355-yard 7th hole. The chances are about 95 percent that the sun is flexing if you’re playing in Punta Mita. That means the El Sol is bouncing off the Pacific Ocean waves serving as a backdrop to the 7th hole green. If you speak Spanish, you’d say the putting green spectacle you’re witnessing is “brilliante,” or “glistening” if English is your first language. 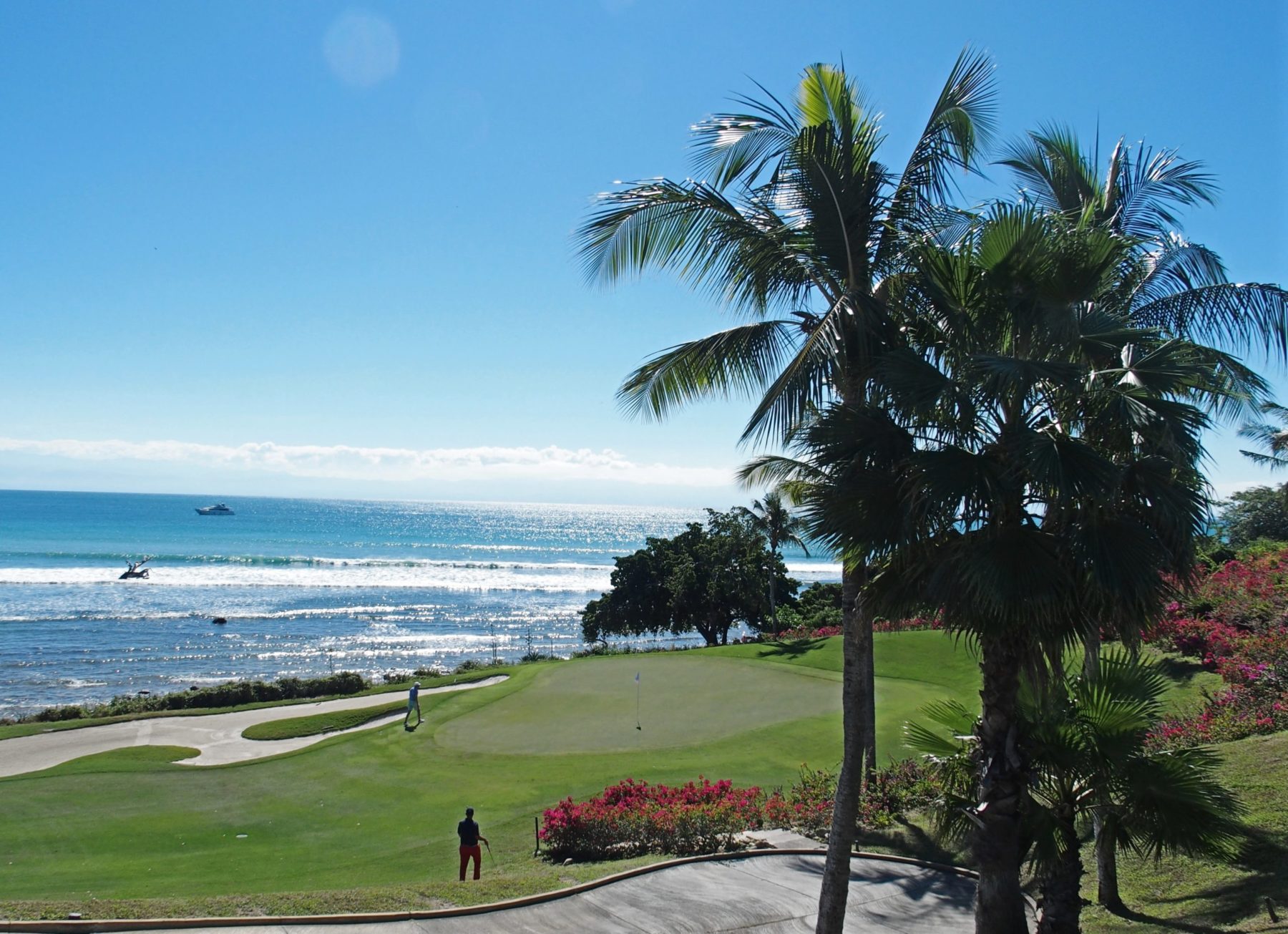 The 8th hole is one part bougainvillea, one part surfer, and one part Jack you’ve done it again. The red flowers accenting the tee box and putting green add a sexy dash of color to this magnificent Par 3. By the way, the surfers frolicking in the ocean to your left are taking advantage of El Faro, one of western Mexico’s best spots for hanging ten.

Look Back and  Say Ahhhhh 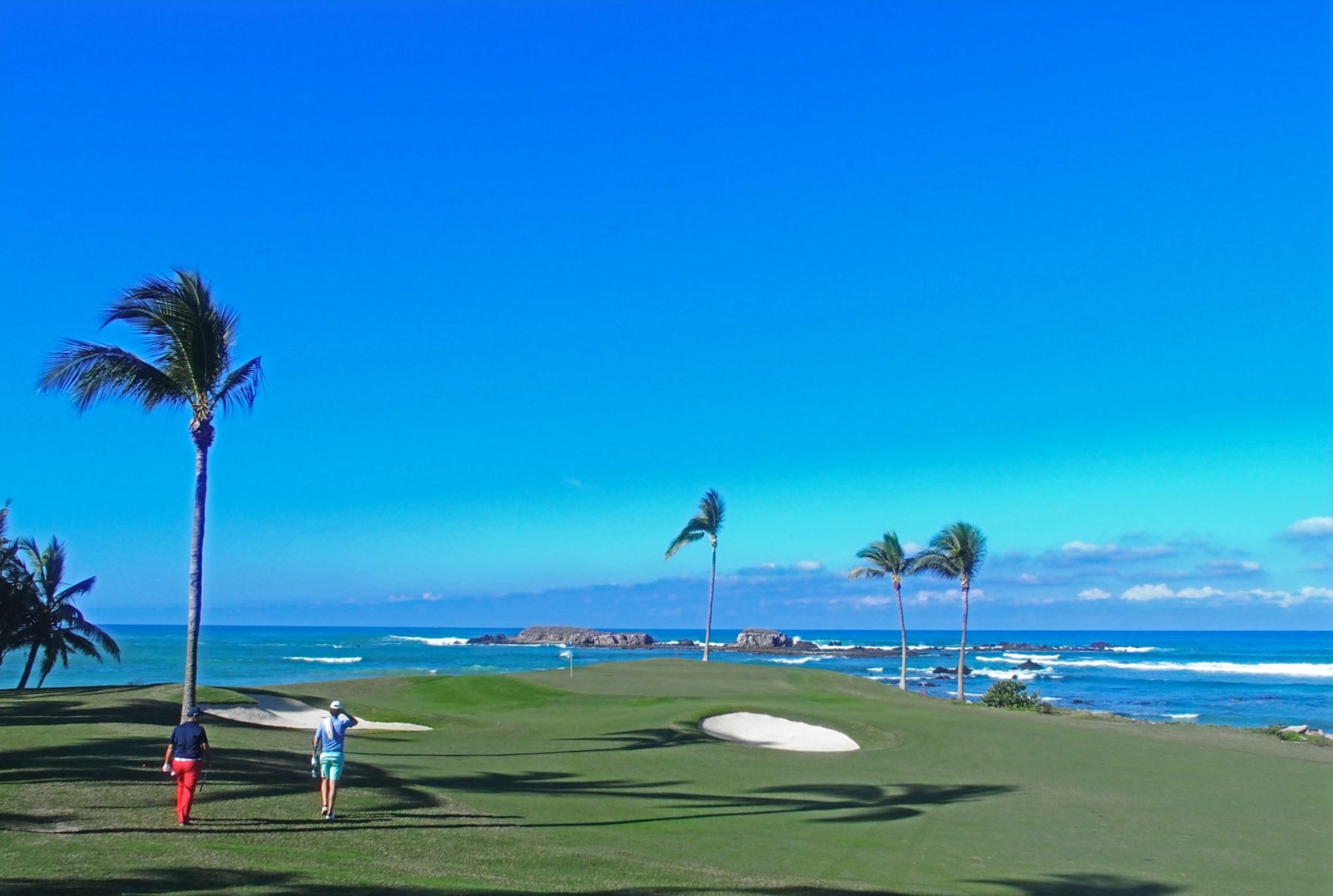 At the turn you may wish to toast the Mexican vibe that is Pacifico. Ask for a “Michelada” to quench your thirst. Watch as the bartender runs a lime wedge around the rim of your glass, then adds a bit of sea salt and even a dash of chili powder. Fill your glass with your favorite beer and add ice. Depending on your bartender’s preference, you may also request tomato juice, lime juice, and Worcester sauce. 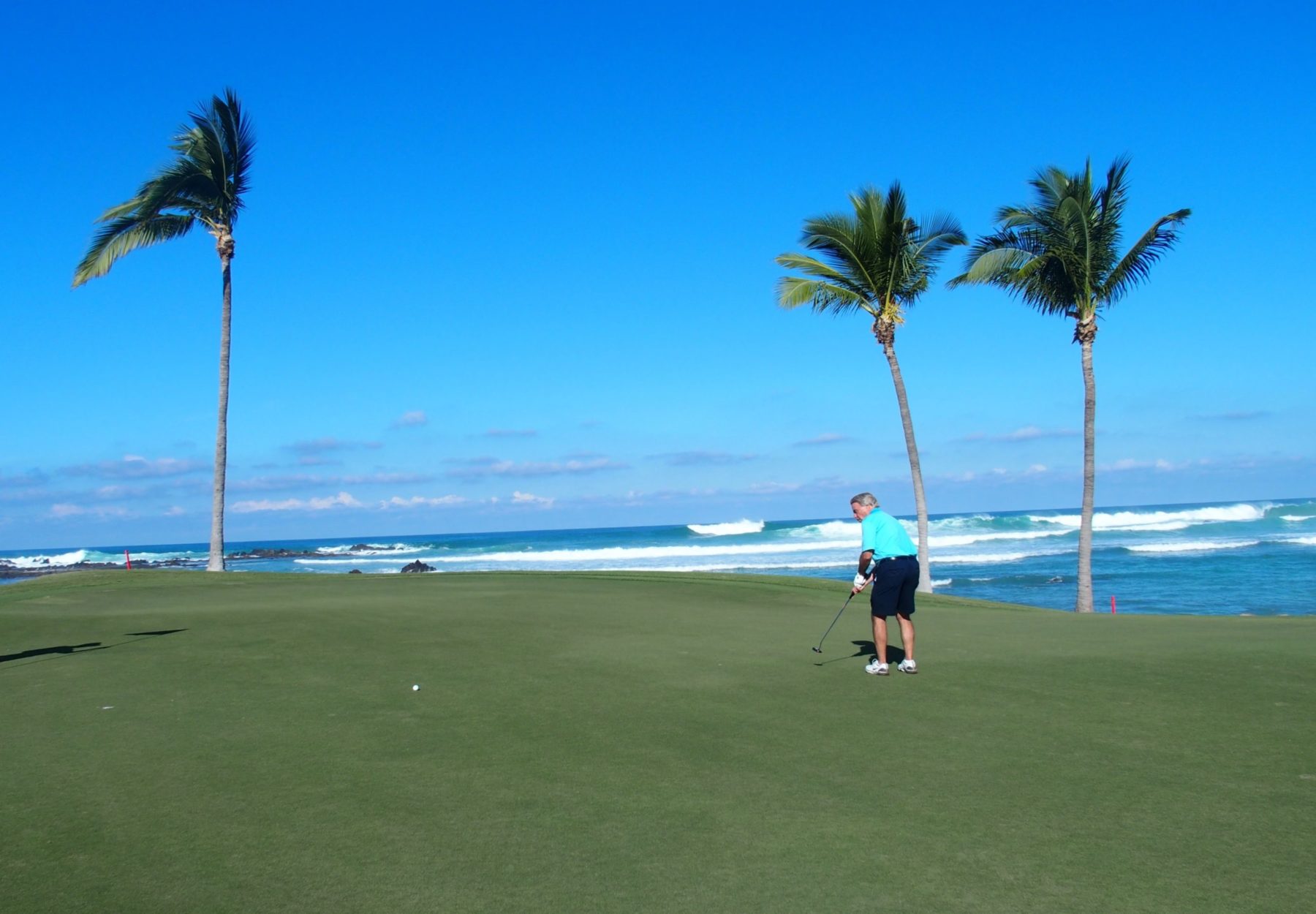 Nicklaus’ flair for the dramatic builds on the Par 4, 387-yard 17th hole. The whole left side is an immense expanse of Pacific Ocean. If you wonder how Jack could possibly raise his game after the spectacular 17, adjust your sombrero before tackling the Par 4, 445-yard 18th hole. This time the Pacific shows up on the entire right side of the fairway and then wraps behind the green. The 18th is nothing short of “magnifico.” 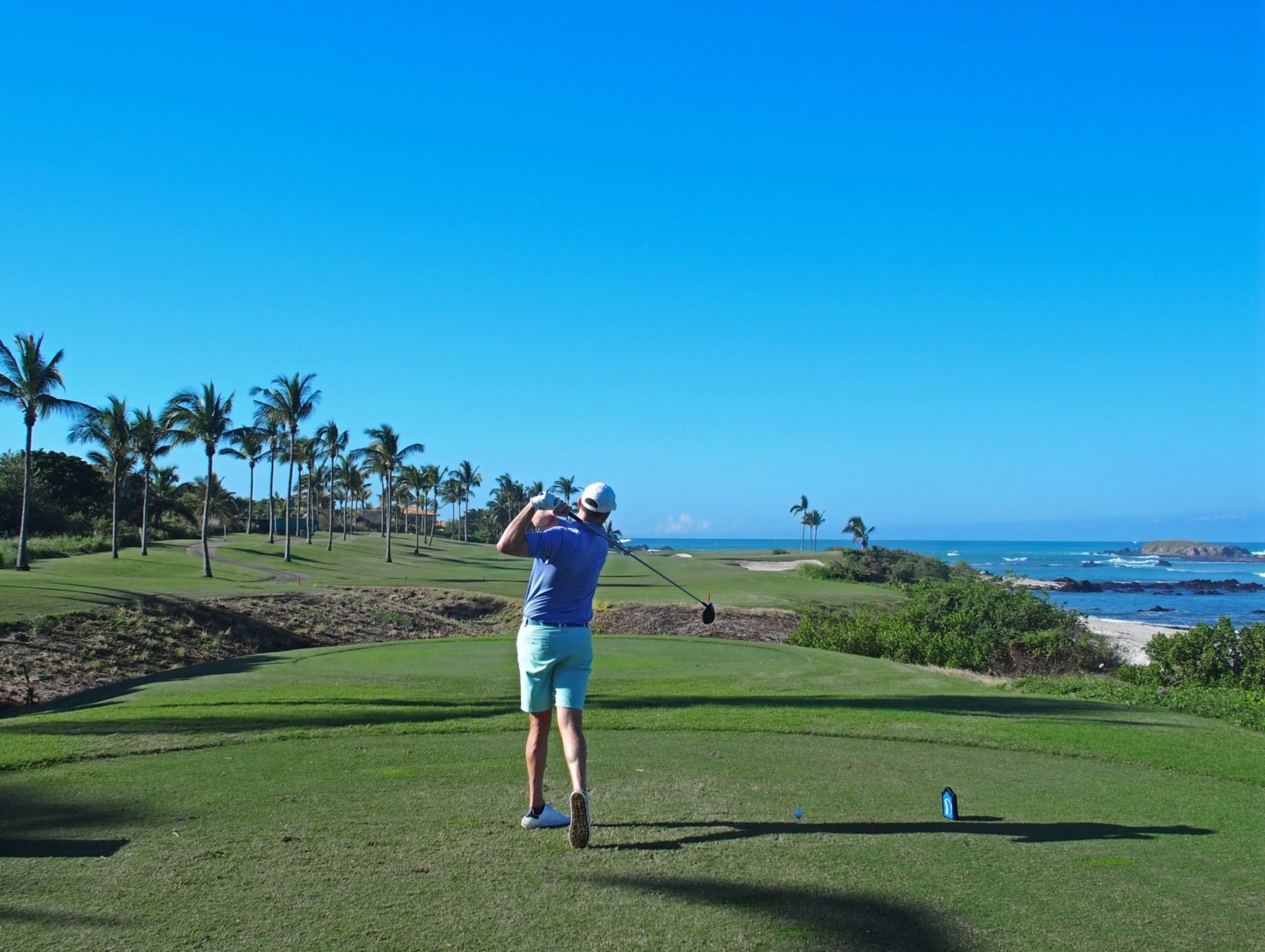 Before heading to the clubhouse, trying circling back for a moment. The best photographers often say to look behind you for the money shot you may have neglected. Absorb the Pacific, the surfers, and a final look at one of the Golden Bear’s best. Let out the satisfying “ahhh” that translates in any language. 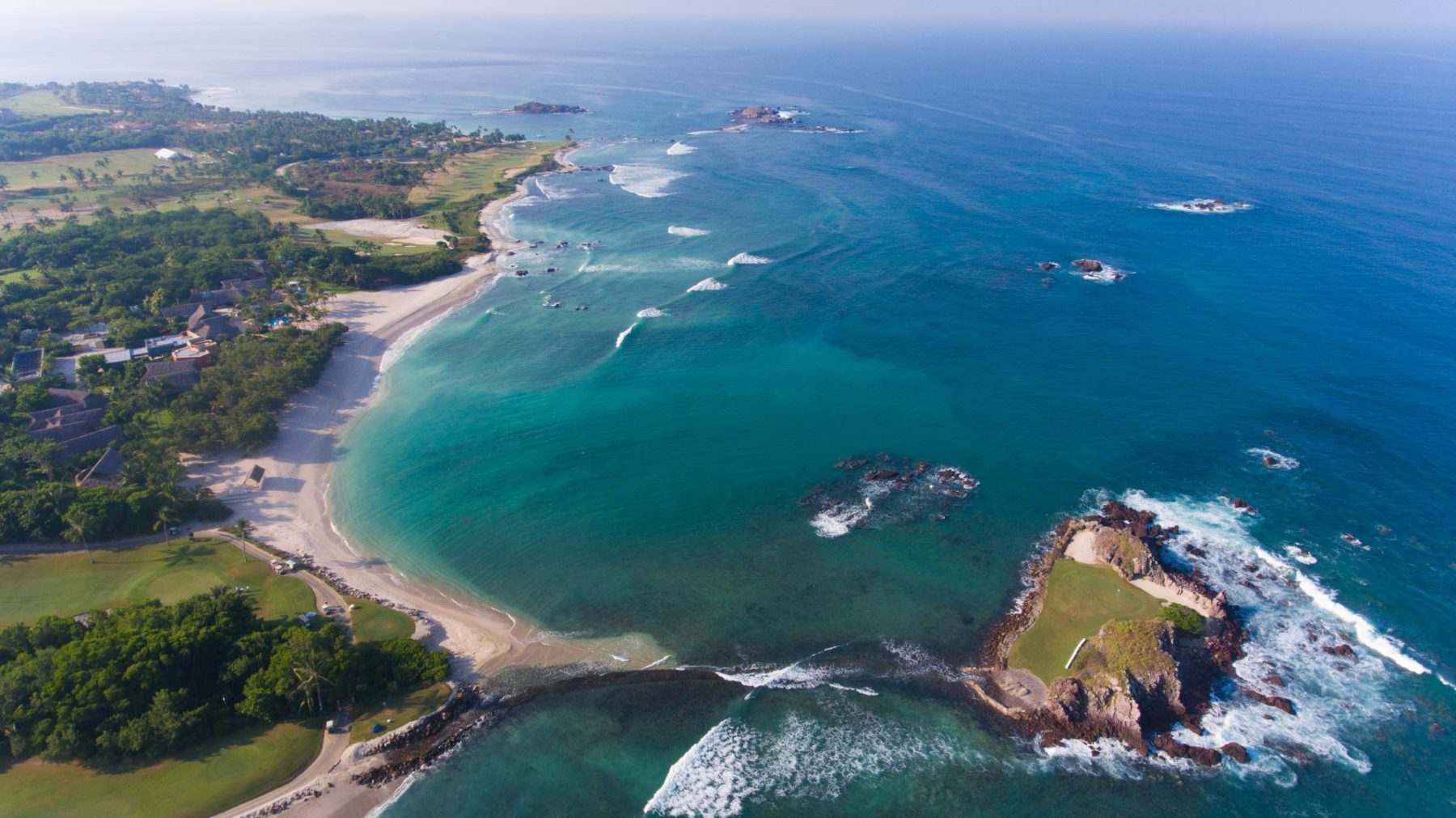 Reflecting on the 1999 discussions between the Punta Mita real estate developer and the golf course designer, it seems that Jack Nicklaus held all the cards. Almost 20 years later, the verdict is in. Pacifico is a golf course in which both sides went home a winner. There is no doubt that Jack created something special in Punta Mita.