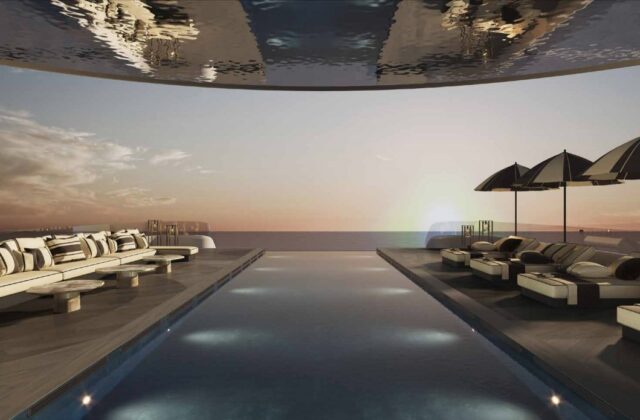 Albin, Marie and Colbon are considered movers and shakers in the design and superyacht industry – inspiring and innovating the world of luxury as they push boundaries in floating hotel design.

The Galaxy project was a refit that was broken down into phases to allow the client to enjoy their new yacht while Njord simultaneously worked their magic on the interior design. The design concept for Galaxy was to create a new universe that the owners could call home.

Phase one of the project took place in Spring 2021 and saw the addition of new rugs, artwork, exterior seating, cushions and a general up-styling of the interior so the client could enjoy a summer season onboard whilst living in a space that felt more like home. This allowed the owner to live in the space and feedback to Njord first-hand on which areas they found most comfortable and which they used less, all of which helped to inform the second, full refit phase.

Every piece placed on board during phase one flowed into phase two, ensuring nothing was wasted. Once the concept was agreed, a full interior refit of the main guest areas took place alongside exterior styling, giving the yacht a new lease of life. With a goal to complete the project within five months, this would be the shortest time frame in which any superyacht has ever undergone a refit. Together with the trust and can-do attitude of the owners, the Monaco Marine shipyard and the formidable crew, Galaxy has done just that.

Completed in February 2022 after a record breaking five month refit, which would typically take a minimum of 18 months, Galaxy is set to sail to the Caribbean from Europe to meet the new owners and host a design unveiling party.