Networking to Success in Aruba 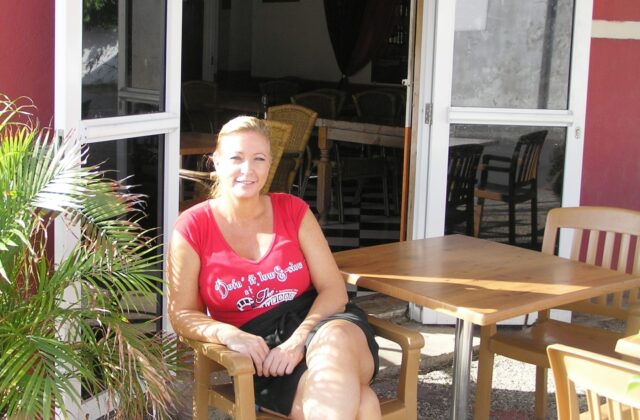 Finding Herself in Aruba
By Tim Cotroneo

When Tina Causey-Bislick moved to Aruba in 1999, she never dreamed she’d be a restaurant owner. Then again, Tina never imagined starting a prominent Aruba magazine, launching a public relations firm, and becoming the top-ranked female beach tennis player on the island.

To say the 45-year-old Causey-Bislick is a multi-tasker is an understatement. Today, the North Carolina-transplant juggles three businesses and maintains her lofty beach tennis perch in a sunrise to sunset calendar that still leaves time for family.

Tina’s journey to Aruba and entrepreneurial success began with a start rarely endorsed by any business “how to” publications. “Before coming here to Aruba, I was a single-Mom working my way through college as an event caterer in Greensboro, NC. I remember that period of my life as being pretty hard,” Causey-Bislick recalled.

Romance was the motivator behind Tina’s initial trips to Aruba. Treks to this Caribbean island drenched in Dutch ancestry were a way to spend time with a boyfriend who was working at the Radisson hotel as an executive chef. “I would visit two to three times per year and eventually landed a job as a writer for Aruba Today, the island’s English-speaking newspaper,” Causey-Bislick said. 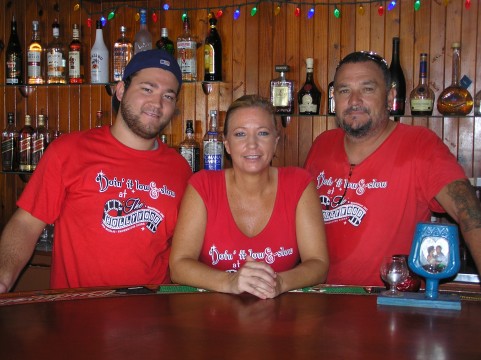 Much to the chagrin of family and friends back in Greensboro, Tina sold everything she owned and moved to Aruba for keeps in 1999. Causey-Bislick began making connections in the Aruba tourism industry, and her business network started to flourish.

Since the very beginning, Causey-Bislick found Aruba to be an encouraging environment, especially from a business standpoint. She began generating business startups through the sheer will of her personality and burgeoning public relations talent. Causey-Bislick credits networking as one of the main reasons she was able to thrive in Aruba, rather than heading back home like many best- intentioned expats.

“During my first couple of years here, I became very involved in some of the activities the island has to offer. I started windsurfing, scuba diving, and playing beach tennis. I developed a circle of friends from each of these activities. These people not only became great friends, they also expanded my business circle,” Causey-Bislick said.

While working for the Aruba Today newspaper, Tina became acquainted with Ann Brown, the Managing Director of Tierra Del Sol, one of Aruba’s most exclusive real estate developments and golf courses. Brown not only developed into Tina’s first public relations client, she also encouraged Causey-Bislick to become the creative inspiration for a new Aruba magazine.

In 2001, Island Temptations magazine was born. The glossy publication featuring fashion, music, dining and art, has grown into Aruba’s most highly distributed magazine. Whereas Causey-Bislick enjoys watching her family restaurant grow in popularity, Island Temptations has been an opportunity for Tina to tap her creative juices. “Each edition has its own personality. I love the anticipation of seeing how each new issue evolves into print. The whole process of interviewing for features, doing photo shoots, and working with the layout is very satisfying,” Causey-Bislick said.

Tina’s ability to network has also resulted in a healthy client list for Oasis Creative Group, her public relations business. The Westin Hotel, Aruba Tourism & Convention Bureau, and a half dozen of the island’s top restaurants all utilize Tina’s flair for promotion. Through her PR firm, Causey-Bislick is able to keep in touch with what’s happening in two of Aruba’s greatest resources, the tourism and hospitality industries.

Causey-Bislick’s penchant for trying new things not only re-ignited a spark in her social life, it also played a role in Tina becoming a restaurant owner. The romantic interest that first drew Tina to Aruba ended after a 14-year run. In 2009, Tina told a friend she’d like to take a ride on a Harley Davidson. A friend suggested that Mike Bislick, a native of Aruba, be Tina’s Harley chauffeur.

Something clicked on that first ride and in August of 2011, the couple wed at the oceanfront home of a friend Tina met through her public relations business. Just prior to Tina and Mike’s nuptials, The Hollywood Smokehouse Diner, featuring southern-style barbecue, opened for business. The restaurant is housed in a building Mike’s grandfather has owned since 1941 and is located in the rustic Aruba city of San Nicolas.

Tina and Mike thought great southern barbecue would be a natural for the 200-plus Texas and Oklahoma natives working a block away at Aruba’s Valero Refinery. Tina developed a low and slow recipe for barbecue that instantly drew a following.

The restaurant has not only been embraced by the nearby refinery clientele, but tourists vacationing 30-minutes away in Aruba’s capital city of Oranjestad also flock to the restaurant seeking an authentic barbecue experience. The old saying, “If the food is good, customers will find you,” has translated into the Hollywood Smokehouse garnering a TripAdvisor number-two ranking out of 180 restaurants in Aruba. 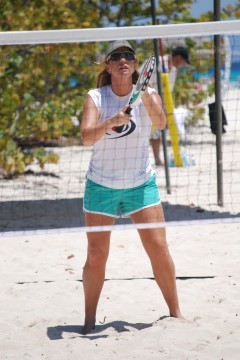 Life isn’t all work and no play for Causey-Bislick. She somehow finds a way to squeeze competitive beach tennis into her non-stop schedule. The sport, originating in Italy 30 years ago, is the perfect activity for Aruba’s white sand beaches. Like her business ventures, Tina takes the sport featuring a tennis net, racquetball-type rackets, and beach sand floor very seriously.

A typical day for Tina starts the night before. The process of cooking the Hollywood Smokehouse ribs begins in the evening after the last customer has gone home. Low and slow is how ribs are cooked in North Carolina and now very successfully in Aruba.

Tina shared with a visitor how “today” was going. “I started my morning by sending out press releases. Then the Westin Aruba called to let me know they were planning a big wedding event and they needed photographers. After sorting that out, I participated in a 30-minute conference call with a PR client. Next, I worked in the restaurant kitchen in the early afternoon. After meeting with a journalist, I’m planning on driving to Moomba Beach to work with my beach tennis trainer. At 7:30 this evening I’m attending the Grand Opening of a new restaurant. By the way, Island Temptations magazine completed publishing a new coffee-table book covering 50 years of Aruba tourism today,” Causey-Bislick said calmly.

Sharing, Survivor, and a Surprise

Looking back, did Tina ever envision the kind of fulfillment she’s enjoyed in Aruba? “I came here because of a guy, but deep down I think there was something else that drew me here,” Causey-Bislick reflected.

An unconventional approach to business, as well as life, has resulted in Tina’s trans-continental path to success. “I’ve never been one to follow the rules. I’ve often wondered why I always needed to find a more difficult or tougher path. I guess it’s okay not to do what everyone else does or follow a normal route,” Causey-Bislick said.

Success in business, or success in life, doesn’t always go to the fastest. Like the best barbecue in Aruba, what’s often savored most is what happens low and slow.

Tim Cotroneo is a Lino Lakes, MN- based freelance writer specializing in Caribbean travel and business.