ITALY’S TOP ATTRACTIONS: The Most Popular Attractions in Italy by Region 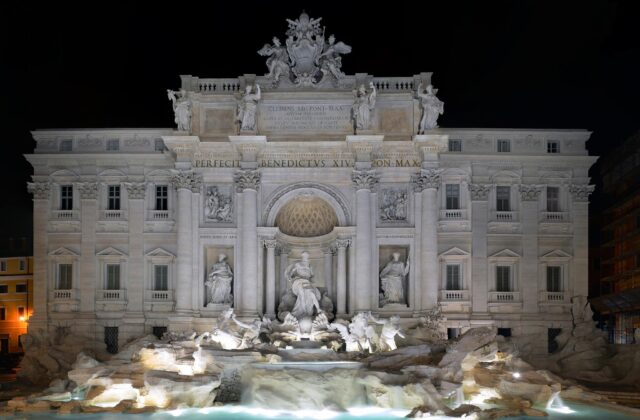 With borders back open, international travel has started to pick up again. Americans have made their way back across seas, with Italy as a top destination to visit. The “Bel Paese”, as it’s known, offers a plethora of rich and diverse tourist attractions worth discovering.

For those who have never visited and those dying to get back to Italy, Musement, the digital platform for discovering and booking travel experiences around the world, has created a map to find out which are the most popular tourist attractions in each of the 20 Italian regions. To conduct the analysis, nearly 2,000 tourist attractions were considered – excluding squares and attractions shared by one or more regions. For each region, the attraction with the highest number of Google reviews was considered the most popular. *

Although it doesn’t reflect the preferences of everyone visiting the country, the infographic offers an interesting insight into the types of attractions that are most appreciated by both domestic and international tourists.
(Full information: https://blog.musement.com/us/the-most-popular-tourist-attractions-in-italy/) 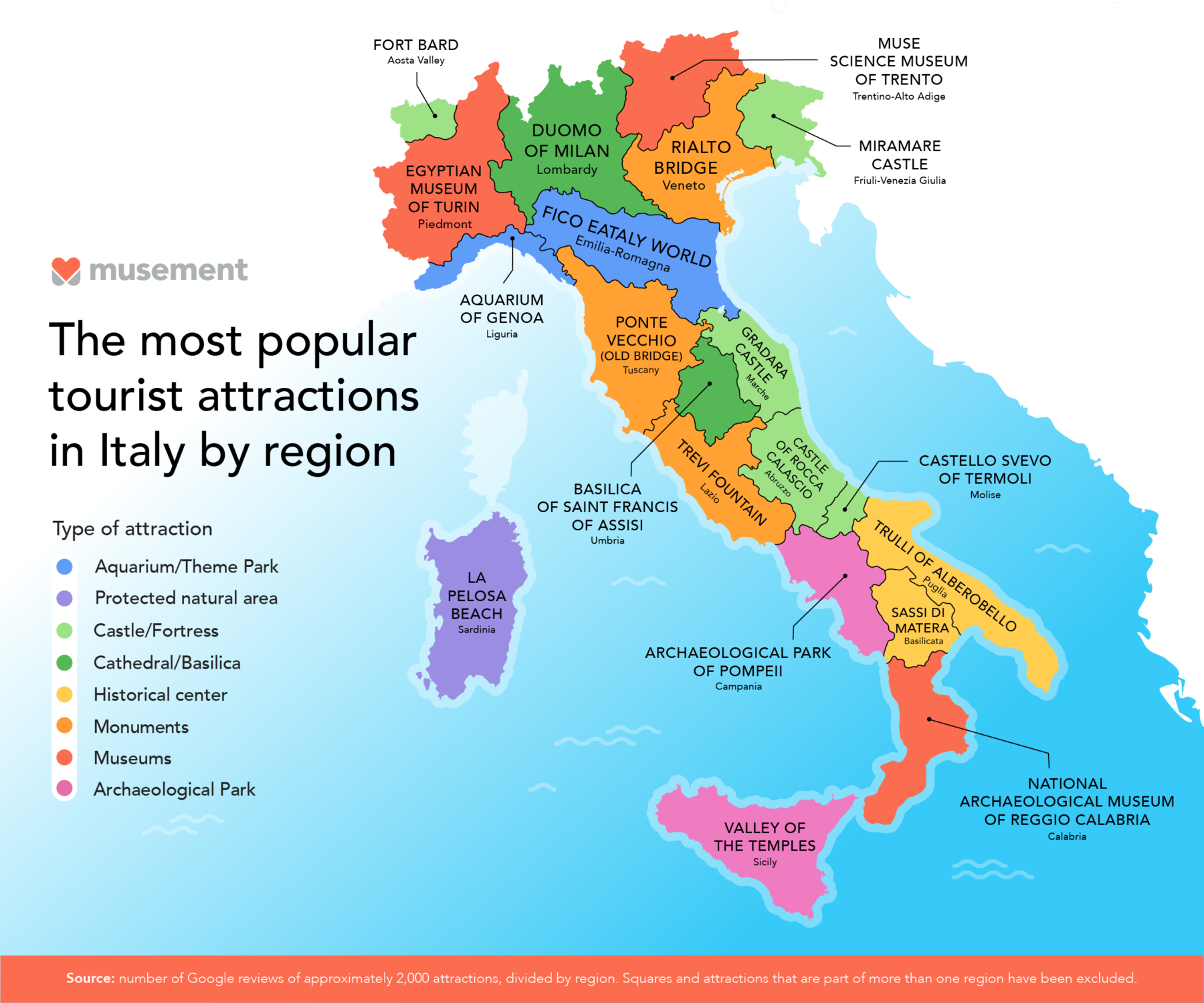 Thanks to its extremely diverse artistic-cultural offer, the infographic does not show any preference for any type of attraction, although castles and fortresses are the most popular attraction in five regions. In the Aosta Valley, Fort Bard is the attraction with the highest number of reviews, while in Friuli-Venezia Giulia the picturesque Miramare Castle wins most popular. In Marche, Abruzzo, and Molise the most popular attractions are also castles, respectively the Gradara Castle, the Castle of Rocca Calascio and the Castello Svevo of Termoli. 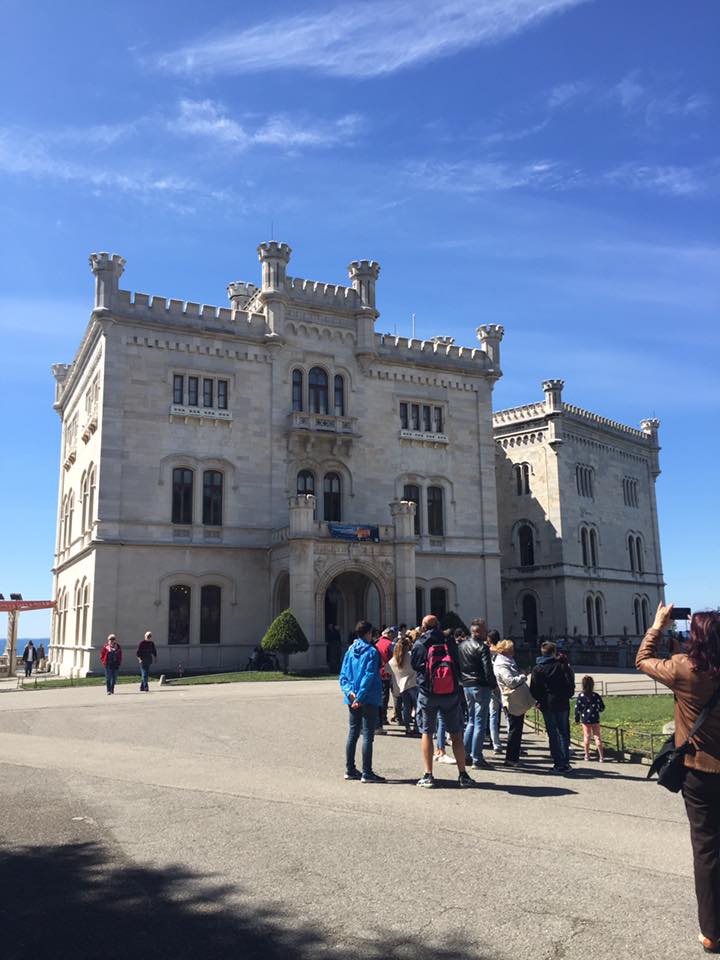 Museums and archaeological parks also generated great interest. In terms of popularity, the Archaeological Park of Pompeii (Campania) was at the top of the ranking in this category with 44,244 reviews, followed by the Valley of the Temples in Agrigento (Sicily), with 35,160 reviews. Among museums, the Egyptian Museum of Turin (Piedmont) received 34,730 reviews and displays one of the most remarkable collections of Ancient Egypt in the world.

Two historical centers were awarded for their uniqueness, with the famous Sassi di Matera (Basilicata) and the fascinating Trulli of Alberobello (Puglia). Among the aquariums and theme parks, the Aquarium of Genoa is the most popular tourist attraction in Liguria, while FICO Eataly World is the most popular in Emilia-Romagna. The only protected natural area to make its way onto the map is the beautiful La Pelosa beach (Sardinia), the marine protected area located in the Gulf of Asinara. 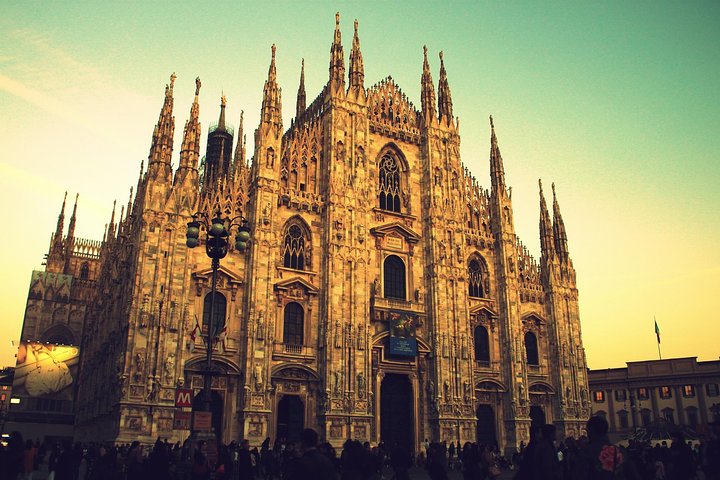 In the lead with 294,024 reviews, the Trevi Fountain (Lazio) manages to beat out the Colosseum as the most popular tourist attraction not only in its respective region but in all of Italy. The Rialto Bridge in Venice (Veneto) is the second highest-ranked attraction with 120,953 reviews. Taking third place in the national ranking is the Duomo of Milan (Lombardy) with 106,747 reviews, the only cathedral to be included in the map together with the Basilica of San Francesco of Assisi (Umbria). Among the most cherished points of interest is the Ponte Vecchio in Florence (Tuscany), with 104,854 reviews.

*METHODOLOGY: To conduct the research, approximately 2,000 tourist attractions throughout Italy were considered – excluding squares, which were considered an integral part of a city, and attractions shared by one or more regions (source: https://www.google.com/travel/things-to-do). The attraction with the highest number of reviews in each Italian region was considered the most visited. Data is updated as of January 2022.