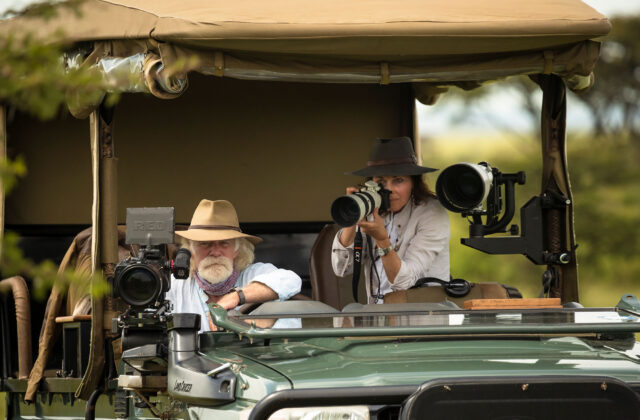 The Explorers Club Medal is the highest honor that can be bestowed by The Explorers Club, a multidisciplinary, professional society dedicated to the advancement of field research, scientific exploration and resource conservation.

The award recognises extraordinary contributions directly in the field of exploration, scientific research, or to the welfare of humanity. As described by filmmaker James Cameron at the awards’ 2013 Annual Dinner, the Explorers Medal is the “Academy Award” of Exploration and the list of previous honorees includes many of the greatest explorers of all time, from Neil Armstrong to Sir Edmund Hillary.

Dereck and Beverly Joubert are the passionate co-founders of Great Plains, a unique conservation tourism company built around bespoke, caring, meaningful and considerate values. Together, the Jouberts have created, designed and now operate thirteen stunning owned and partner safari properties in Kenya, Botswana and Zimbabwe along with the company’s charity, The Great Plains Foundation, which strives to preserve and protect landscapes, wildlife, and the communities which rely on them in Africa. As National Geographic filmmakers, the duo have more than 40 produced films, 12 published books and many scientific papers, Dereck and Beverly are also the founders of the Big Cats Initiative, Project Ranger and their charity Great Plains Foundation.

“The finest explorers in the world over generations of adventurers have been associated with two great organisations, The Explorers Club and the National Geographic Society. So, being honoured here and being a part of both makes us so very proud knowing that the years of hardships, injuries, failures, near deaths, cuts, bruises, broken bones and other mishaps are being seen as just what you do in this unique ‘club’ to achieve the successes- and that is what makes an explorer I guess.” commented Dereck Joubert