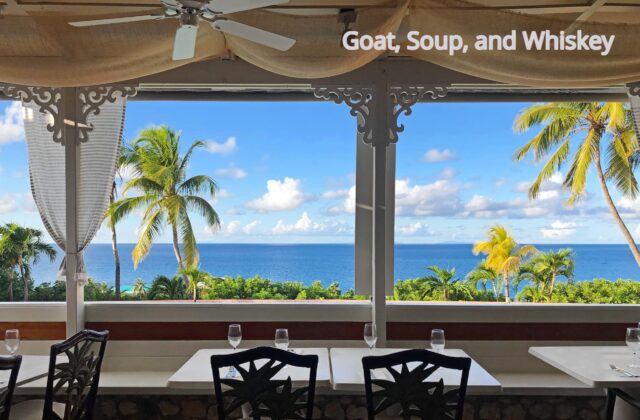 From cooking soup in a closet in the Rocky Mountains, to opening a restaurant with a sweeping Buck Island view here on St. Croix, Scott and Caroline Jackson have worked hard to build their multi-restaurant business. Located in the former home of the Cultured Pelican Ristorante, ‘Goat, Soup and Whiskey’ is operating seasonally here on St. Croix from December through April. With another seasonal location in Ohio, plus the year-round location in Colorado, Scott and Caroline have curated a fantastic staff (the Goat restaurant family) who travel with them to work the seasonal locations. If you want to know where the unusual restaurant name came from, why they chose St. Croix and why you should try Goat, Soup and Whiskey this season, read on!

The Story of Goat, Soup and Whiskey

We sat down with owner, Scott, and manager, Marisa, to learn the story behind the name of Goat, Soup and Whiskey. Like many memorable stories, this one starts with Scott and his college buddies throwing huge kegger parties. At these keggers, the downstairs neighbor’s dog, Pali Wali (who was half Sheep Dog and half Dalmatian), was often in attendance. Pali Wali liked to cause trouble like a goat, so he became lovingly known by party-goers and locals simply as ‘Goat’. 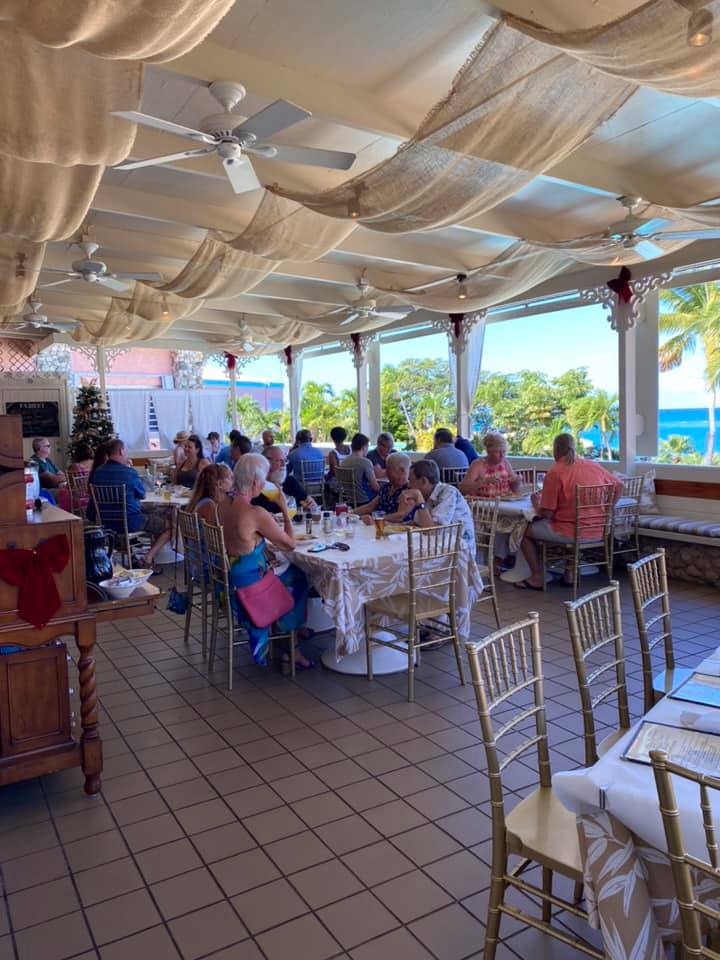 In 1997, Scott was offered the opportunity to buy the tavern he was working at and decided to go for it…but what to name it? Still known locally for his keggers, attended by the infamous Goat, Scott thought ‘Goat’ would be a great start to the name. The tavern’s kitchen was actually a coat closet, so the only food they could serve for the first four years was soup. Add in the fact that a liquor license in Colorado at that time was called a ‘Whiskey License’, and Scott combined all three oddities into one tavern great name. Thus, the first ‘Goat, Soup and Whiskey’ was born. Put-in-Bay, Ohio became the home of the second Goat, Soup and Whiskey location in 2006.

The Goat Comes to St. Croix

In 2008, Scott and Caroline visited St. Croix on vacation with family and arrived just in time for Hurricane Omar. After getting lost on the way to their rental on condo row, they stopped at the police station to ask for directions and were kindly given a police escort to their vacation condo. They were then told that a hurricane was on the way and they should go to the grocery store and get provisions before the storm hit. They made the best of the storm and its aftermath and started falling in love with St. Croix despite the challenging start. Two weeks later they had their staff come down to visit the island as well, and they too fell in love.

Scott and Caroline continued to visit St. Croix every few years after that, making local friends all across the island. So, when they decided they wanted a tropical location for their next Goat, Soup and Whiskey, St. Croix was the obvious choice. After looking at a few possible restaurant locations, Scott met Dennis Giancontiere, who was selling Cultured Pelican, and the two hit it off right away. In 2019, Goat, Soup and Whiskey opened at Coakley Bay condos in the old home of the Cultured Pelican, with Dennis on staff! In fact, Dennis is currently part of the Goat family that travels seasonally to the Put-in-Bay location, and you can still find some of his amazing desserts on their St. Croix menu.

As you may have guessed, the Goat, Soup and Whiskey menu varies by location, but the food is consistently delicious. Scott and his crew try to source as much locally and seasonally as they can at each location. Here on St. Croix that means fresh fish and local lobster, locally grown salad greens, tropical fruits and even goat curry. As with their other locations, Goat hand cuts their own steaks in-house, makes their soups from scratch, offers specialty cocktails featuring local spirits and fruits, and creates unique daily specials. The restaurant is open six days a week for lunch and dinner as well as brunch on Sundays. Their staff is friendly, and the service is excellent, offering a very stateside dining experience. Another great thing about the St. Croix Goat location is that the dining room is open air, spacious, and features a stunning view of the Caribbean Sea and Buck Island.

Thank you Scott and Caroline for choosing to make St. Croix your other home and the newest Goat, Soup and Whiskey location. By bringing the mountains to the island, Goat has brought the joys of St. Croix to a whole new audience, including the Goat restaurant family. If you haven’t tried Goat, Soup and Whiskey yet, I highly recommend getting there and enjoying at least one meal while they’re open for season. Bon appetite!

Goat, Soup and Whiskey is where flip-flops meet fine dining. Located on the East End in Coakley Bay, Goat offers delicious dining with spectacular views of Buck Island and the…