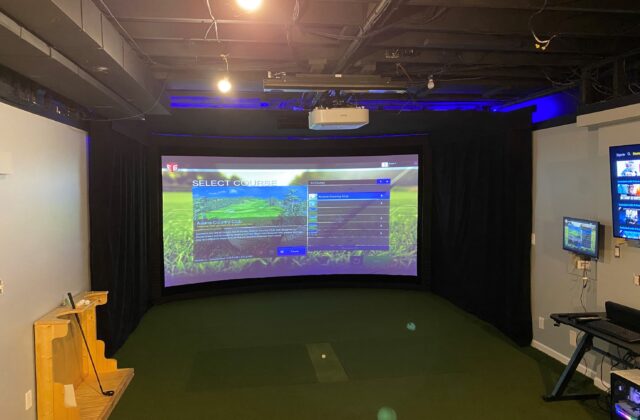 TOLEDO, OH – You’ve heard of the auto enthusiast with the garage full of classic cars or the enterprising hobbyist who’s built every LEGO set and has them all on display. However, you’ve probably never met a golf simulator aficionado quite like Dr. Harry Brandt. This Maryland resident has built multiple simulators in his home. It’s more than his hobby. It’s a bit of an obsession. He’s also the founder of a 20,000-member Facebook group on golf simulators.

“I’ve been deeply involved with golf simulation and launch monitors for the last 15-plus years,” says Brandt. “And I’ve studied all the technologies. I’ve worked with a number of different companies doing beta testing and have had a series of different simulators through the years that started in my basement and boiler room. Then my wife agreed to let me move it out into the main area of our home.”

What initially took up half a room with a smaller hitting area recently expanded – with the help of Ace Indoor Golf (sister company to the DIY-consumer-facing Gimme Simulators) – to a curved screen spanning more than 15 feet. It incorporates several different simulator technologies within the same space, including Trackman Flightscope, aboutGolf, Foresight Quad, Uneekor ISO, and Uneekor QED. It’s the mother of all simulators. It’s pretty awesome.” 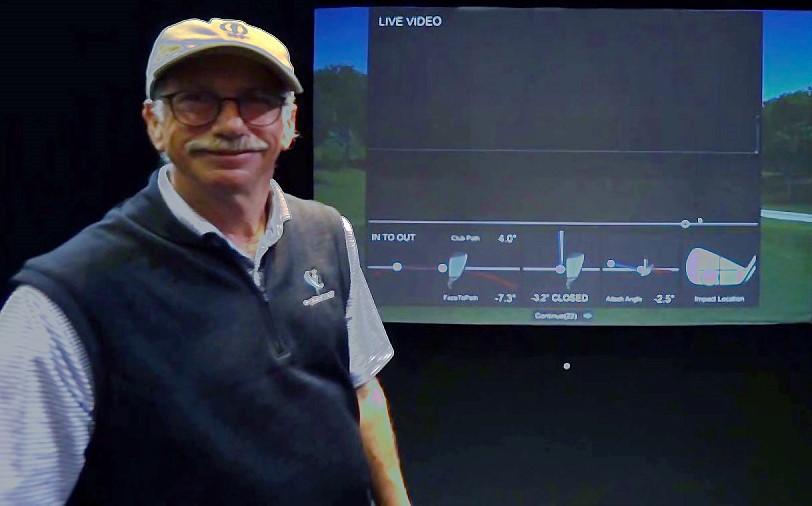 Brandt’s design goals included having a clean, uncluttered look; room to film his swing; a good turf setup; and something that could handle several different simulators plus multiple high-speed video cameras at various angles. Of all the experts he’s worked with through the years, he finds Ace Indoor Golf’s Joe Neumeyer to be the most knowledgeable about how to pull it all together.

“He had a lot of installation experience before starting this company, so I turned to him,” says Brandt. “We had fun. I gave him carte blanche to do what we needed to do, to build a state-of-the-art simulator. He looked at the space, and I could see his wheels turning and he saw mine turning, and we put it all together into a design. He created elevations and 3D designs. After some back-and-forth modifying designs, we got it done. I had a specific type of mat I wanted to hit off, but I wanted to blend it in with the rest of the bay, so we had to customize the floor. We also needed a supercomputer to handle all of the various software packages, to make sure they weren’t conflicting with each other. I also have specialized lighting for high-speed video.”

Brandt’s first sim back in the early 2000s included the Golf Achiever launch monitor, which at that point was ahead of its time. It used a laser grid that the ball would travel through to measure ball speed and launch angle. As time passed, he started acquiring better and more advanced technology. He says he became so obsessed with the technology platforms he would run them all at the same time and look at the differences in the data they would generate, to absorb as much knowledge as he could. He got to know the manufacturers and developers well. And all the while, he’d install the latest-and-greatest sim equipment available. 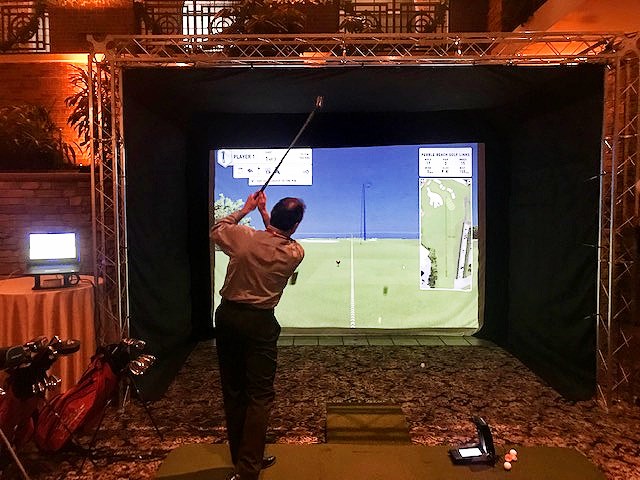 “Initially I was just working on my golf game, trying to lower my handicap,” he recalls. “It always intrigued me how you could track a moving object in terms of its spin, speed and launch angle. And this was before there was a ton of simulation. The early simulators never seemed very realistic, and didn’t do a very good job of measuring spin. So, you wouldn’t necessarily be getting accurate data when you would hit in a simulator until probably 2007 or 2008. Then you could begin having fun playing in a simulator that seemed closer to real golf. And now I have a group of buddies who I play simulated golf with, and we all score very similar in good simulators to what we might score on a golf course. Plus, the ball flight appears very realistic. You can hit cuts and draws in a simulator, and the ball reacts on-screen the way you’d expect it to outside.”

Brandt ultimately wanted a simulator space to complement what he does online with his Facebook entourage, which is when he turned to Neumeyer who he had come to know through the group.

“Joe was always giving such solid advice to people and he knew what he was talking about,” says Brandt. “We became friends and when people would call me and ask for a recommendation, I’d recommend Joe. I finally asked him to look at my basement and see if we could design something really special. He flew in and we came up with what I think is a really intriguing design. He’s very pragmatic and can figure out how to make anything happen. What really impressed me was he sent me a 3D rendering of what my basement was going to look like, and it’s very close to how it actually ended up. He gave me a good sense of the design process, and even helped get a virtual green installed in the back of my simulator room. The actual platform itself moves – you can set up slopes, saddles, crowns, and all different kinds of breaks.” 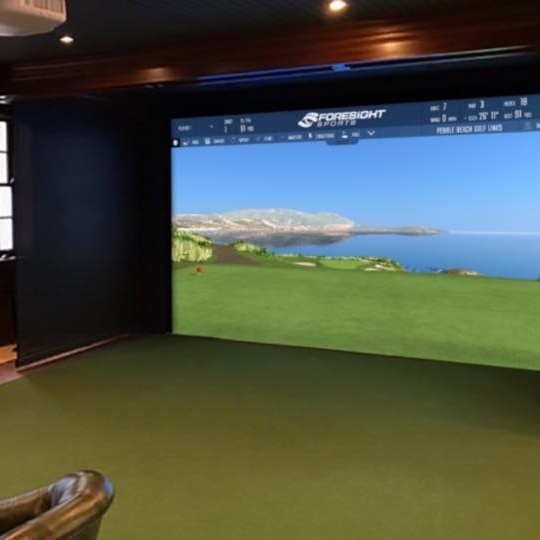 Brandt’s advice to anyone wanting to install a sim? Consult a professional “There’s such complexity,” says Brandt. “Get expert advice. As much as I know about golf simulation from studying it, I still turned to expert advice when it came time to put it all together. Joe and his group have access to all the products, they build a lot of the sim themselves in a high-quality, uncompromising manner, and understand things like how to have a projector that’s adjustable with a curved screen so it’s perfect. They know projector placement, so there aren’t shadows on the screen. They know lighting, high-speed video, turf materials, what to use, what to design and how to piece all of the elements together. It seems easier than it is. If I’m playing golf in a simulator, I want to make the experience as close as possible to outdoor golf. What we’re really going for here is the simulator accurately measuring ball speed, launch angle, spin – all the elements of impact. The ball flight should mirror what will happen on an actual course. It’s pretty darned close now, and getting better all the time. But you just can’t go it alone. You need experts at each stage of design and implementation, and Ace meets all those needs. I’m particularly impressed with the installers and with Joe. He’s remarkably knowledgeable. I know many of the industry experts and he can’t be beat for simulator design and implementation.”