A Boston Hotel That’s a Revolution in Lodging

May 19, 2022. Boston, MA. The Revolution Hotel is redefining the concept of a stylish, yet remarkably affordable boutique hotel in the city. The visionary property opened in 2018 and is a celebration of all-things Boston, the American Revolution, and the innovation that has long-defined this city on the Charles River. That spirit of innovation extends to the property itself. This is an eclectic, art-filled hotel aimed at empty nesters, families and younger travelers, with a focus on value. That price point is a key attraction in a city where the lodging options are some of the most expensive in the country.

Located in Boston’s vibrant South End, at the intersection of Berkeley and Appleton Streets, The Revolution Hotel is minutes away from popular visitor spots such as Copley Square, Newbury Street shopping and the Public Garden, while just a few blocks from notable neighborhood restaurants that are treasured local favorites. The hotel is walking distance from the Back Bay Amtrak station and serves as the ideal basecamp for visiting blockbuster exhibitions at the SoWa Power Station, such as this summer’s Beyond King Tut immersive experience. 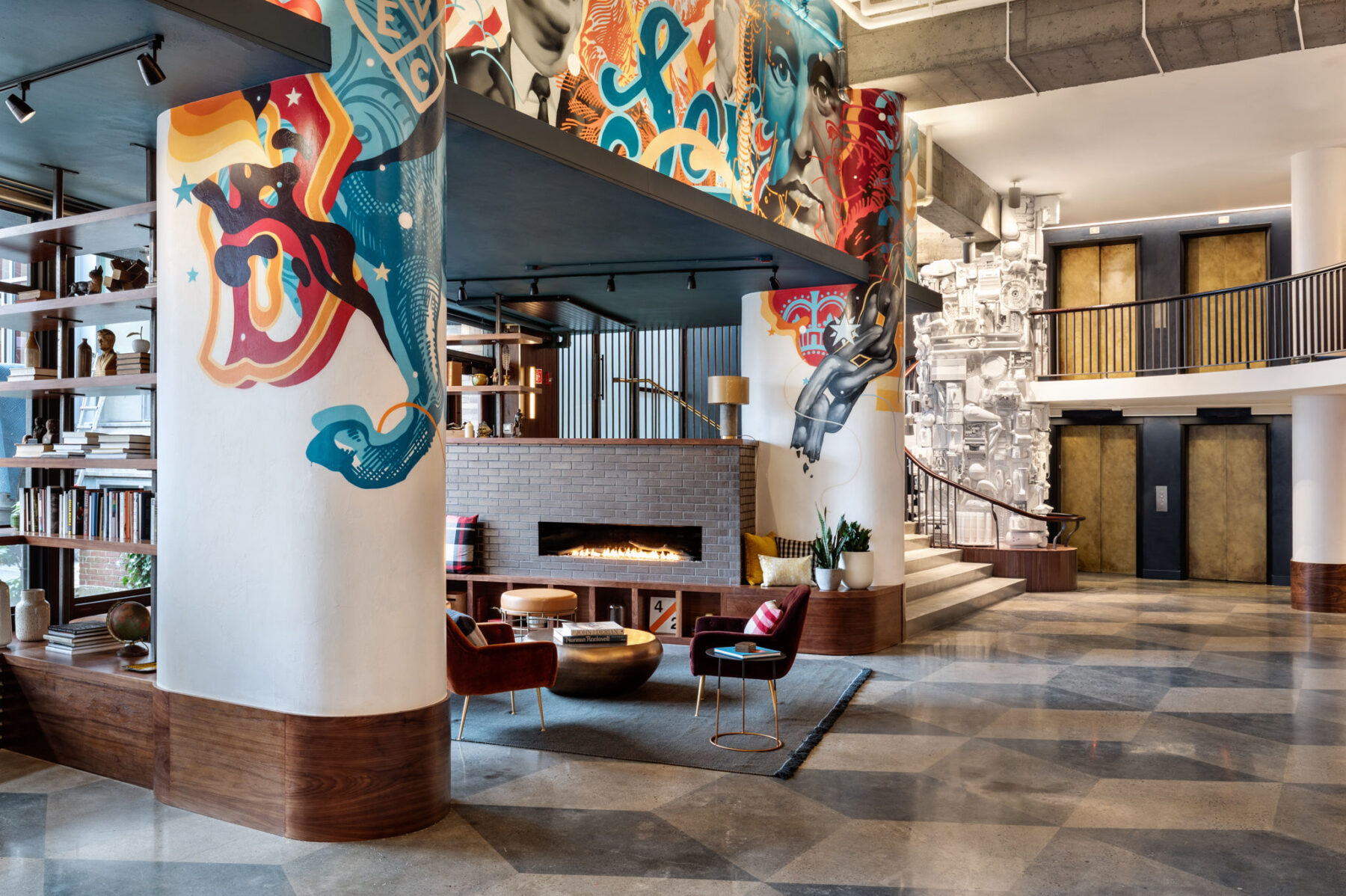 The hotel has revolution in its DNA. Originally built in 1884 as the first YWCA in the United States, it offered a “Training School for Domestics” as well as safe and affordable housing for working women and students. It offered the first gymnasium at any YWCA in the country, at a time when providing for the health and fitness of women was a radical move. Just as important, it provided outreach to immigrant women landing in Boston was one of the first integrated housing facilities in the city. The original building was added onto with a mid-century modern tower of variegated gray brick and horizontal bands of slate panels in the 1950’s, overlooking a walled courtyard garden.

In 2018, that building was developed by The Mount Vernon Company as The Revolution Hotel and given a radical makeover by PCA / Prellwitz Chilinski Associates architects who worked alongside Adam & Co. Design to bring the spirit of The Revolution Hotel to life. The renovation paired the building’s mid-century modern bones with 21st century upgrades, including bold contemporary art and graphics. 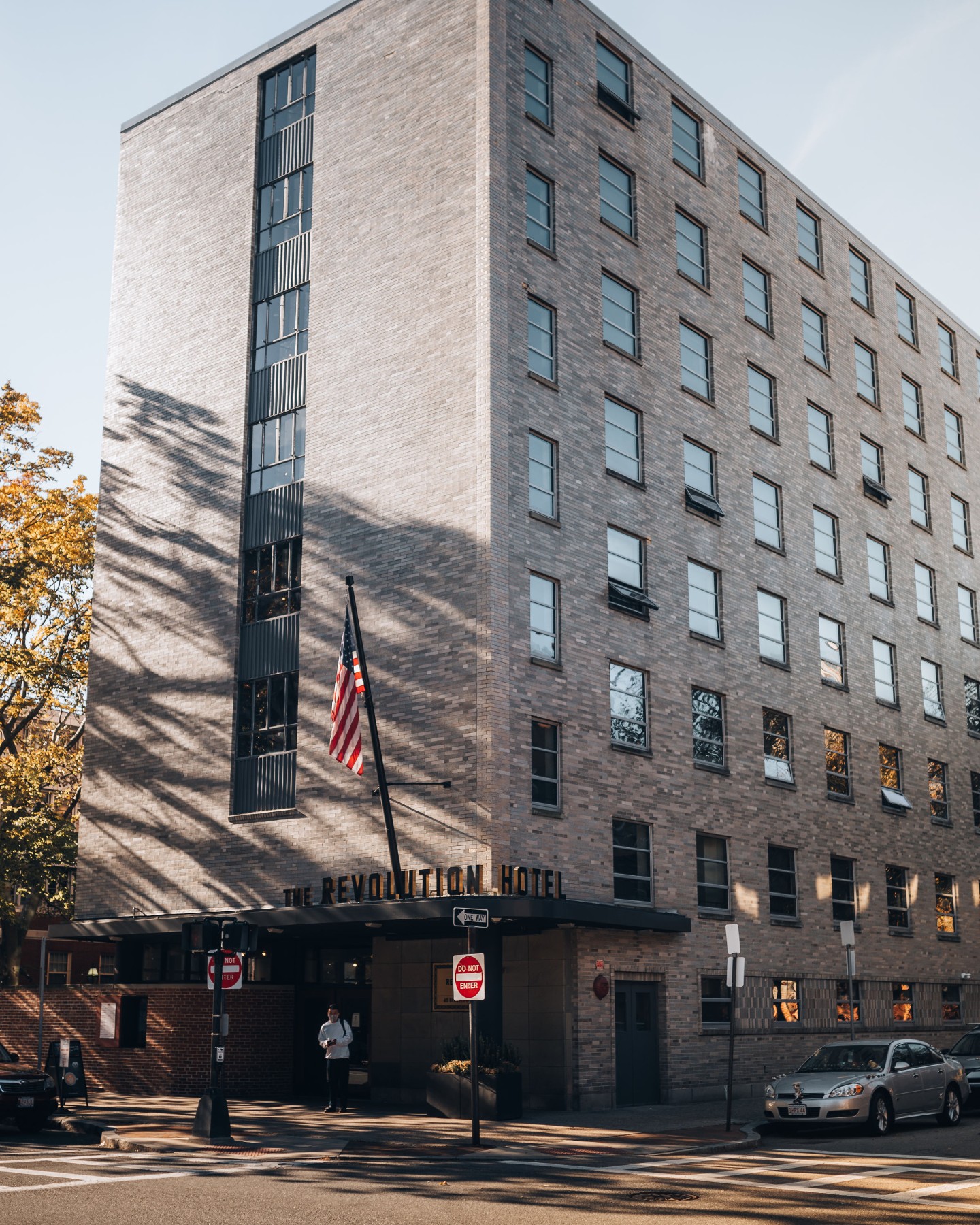 The resulting 177-room hotel offers a variety of lodging options. They include the stylish Revolution Lofts Suites, Revolution Lofts and the Studio Suite. For the cost-conscious traveler, the hotel has a range of more affordable rooms, including Bath In-Room and Bath Down-The-Hall options. Quad and Triple rooms feature integrated bunk beds, perfect for families or friends traveling together. Bedrooms are adorned with lyrics from hit songs by Boston recording artists — think Aerosmith, Donna Summer and The Cars, among others.

The hotel features bold commissioned artwork. Artists, artisans and makers were enlisted to create public areas that function as a de facto art gallery as well as a vibrant and energetic common space ideal for meetings, working and socializing. Individuals Collective was responsible for the three-story “Innovation Tower” wrapped around the lobby’s elevator column, which celebrates some of Boston’s greatest inventions, incorporating objects such as the typewriter and Bose headphones as well as telephones, Converse sneakers, basketballs and volleyballs. A dramatic 65-foot mural interpreting vignettes from Boston history was done freehand by California artist Tristan Eaton. 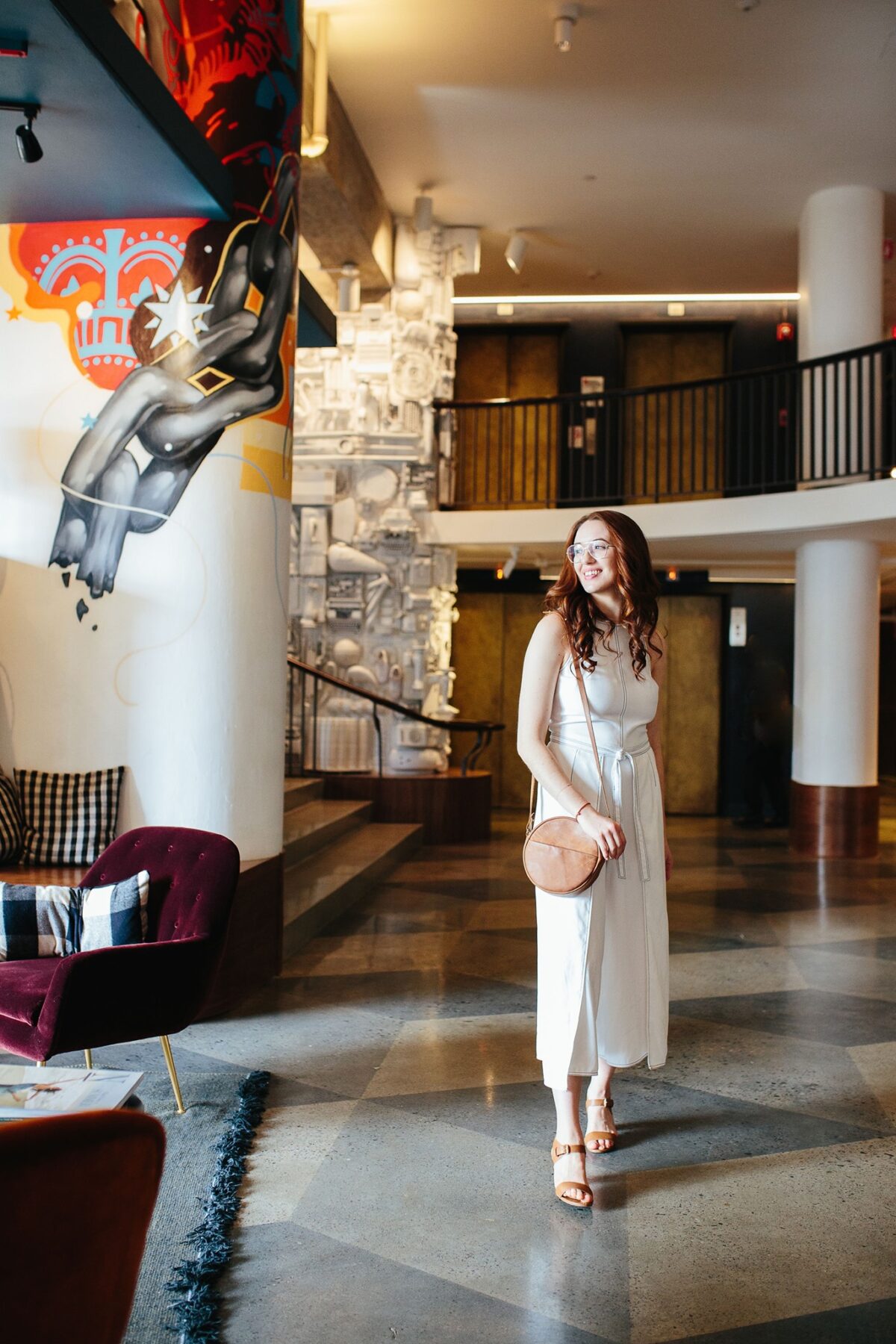 The hotel hosts Kohi Coffee Co., a walk-up coffee shop that originated in Provincetown, MA, as well as Cósmica, a Mexican restaurant that serves dinner and weekend brunch. The hotel also has a community co-working space playfully named Conspire.

The Revolution offers a 24-hour fitness center and free Wi-Fi throughout the hotel. Dogs are welcome for a $25 fee per stay.